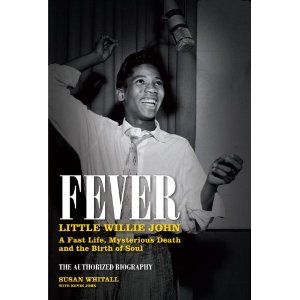 “Little Willie John was a soul singer before anyone thought to call it that“… not my words, but those of the Godfather of Soul, James Brown, so maybe we better believe it. The musical histories though don’t give Arkansas-born, Detroit-raised Willie John the due credit that Brown and countless other music biz insiders think he should have. The music essays go on at length about soul’s founding fathers – the Holy Trinity of Ray Charles, Sam Cooke and Jackie Wilson and John is often relegated to the footnotes. Till now that is. American music journalist Susan Whitall – sometime editor of Creem magazine – has long been intrigued by the Little Willie John story, particularly the events surrounding his death in 1968 in the Washington State Penitentiary. Together with the John family, Ms Whitall has pieced together the facts of Willie’s short life and hopefully it should help establish him as a major figure in black music history.

The 214 page book tells the story of Willie’s rise from the projects of Detroit and on through his various musical achievements – most notably his classic recordings with the King label – and on to the mysteries surrounding his death. The narrative is filled with testimony from those who knew him – family and friends, of course, but also other musicians who all testify to his talent and impact. The list of those who speak for Willie reads like a soul/jazz/blues who’s who – B B King, Betty Lavette, Gladys Knight, H B Barnum, Jerry Butler, Jimmy Scott, Little Richard, Mack Rice, Sam Moore, Solomon Burke, George Benson, and Jeffery Osborne amongst them. The common themes running through all their testimonials is that – A) Willie was a huge talent whose style was crucial to the crystallization of soul and – B) Willie was a loving, kind, gentle, generous human being. Some of his supporters almost make a case for canonization. The facts of Willie’s life, however, don’t bear that out. He had a huge drink problem; he was a drug abuser; he was involved in petty crimes; he was a serial womanizer; he had a hot temper; he assaulted his wife; and – let’s be frank – he was involved in a high profile murder/manslaughter case – for which he was duly convicted. Maybe a better balanced picture of Willie John’s character might give the book more credibility.

Equally – and this a problem with many biographies, not just this one – I find it hard to believe that people can remember – word for word – conversations they had fifty, forty year ago! I know it’s a literary convention but it wears at times. That said, the book offers an excellent snapshot of black urban life in the cities of the US in the fifties and early sixties; it speaks volumes about the birth of soul music and it’s hugely insightful in its description of the US music business in the fifties and sixties. Big names like Berry Gordy, Jackie Wilson, Levi Stubbs and King label-mate James Brown were all major players in Willie’s story and for serious music students (of any persuasion) ‘Fever – Little Willie John’ is highly recommended.

FEVER – LITTLE WILLIE JOHN… A FAST LIFE, MYSTERIOUS DEATH AND THE BIRTH OF SOUL… by SUSAN WHITALL is out now and published by TITAN BOOKS