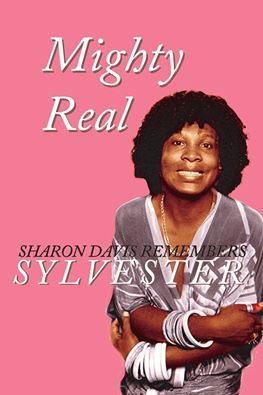 Sharon Davis is an author and journalist, best known for her work on Motown. Indeed she worked for the label for many years and is considered an authority on its history. For a time in the 70s, while at EMI, Sharon also worked as a publicist for Fantasy Records and was assigned to promote disco star Sylvester – best known, of course, for ‘You Make Me Feel Mighty Real’.

2013 was the 25th anniversary of the singer’s death and 35 years since that song had stormed the charts and the clubs, so Sharon planned to put out a book on Sylvester to tie in with both anniversaries. However for all kind of reasons, the book has only just been published, so maybe a little impact has been lost with the passing of those anniversaries. Still the short book (it’s only 80 pages worth) – ‘Mighty Real… Sharon Davis Remembers Sylvester’ will quickly become a must-have for Sylvester fans (are there that many?), but serious students of the music business will find much to interest them too. For a start, the book offers an insider’s detailed insight into how the music biz promotional machine works and how hard artists and their various teams graft to grab those important interviews, the crucial radio plays and the eye-catching headlines. Sure, it’s not “hard labour” (like in a coal mine or working a 12 hour factory shift… or standing in front of 30 kids all day, for that matter) but serious record promoting can be a nerve-shattering 24/7 grind and Sharon lucidly describes how it can take its toll.

The book also shows how fame and adulation can transform personalities and inflate egos to a point where an artist often ends up falling-out with those nearest and dearest to him/her. In Sylvester’s case he fell out with both his mentor Harvey Fuqua and his wonderful backing g vocalists – Two Tons Of Fun (Martha Wash and Izora Rhodes). Sharon’s book also shows that there was a lot more to Sylvester than the song with which he’s always associated and his disco “Queen” image. It touchingly describes his attempts to become a serious cabaret singer and a soul performer. It recounts the work he did for AIDS charities… and on that theme, it gives a telling account of the gay scene in 70s New York and San Francisco and the sad devastation that AIDS wreaked upon that scene.

Sadly, the book is short on detail on Sylvester’s early life (apparently he rarely talked about it) and on his final years (when Ms Davis had little contact with him). Despite that, the book offers a rounded portrait (plenty of pix, by the way) of a singer who deserves to be more than a footnote in soul and R&B histories. Sylvester is pictured with Sharon, below.

‘MIGHTY REAL SHARON DAVIS REMEMBERS SYLVESTER’ is published by Bank House Books @ £12.50 and is available via Amazon and all reputable book sites