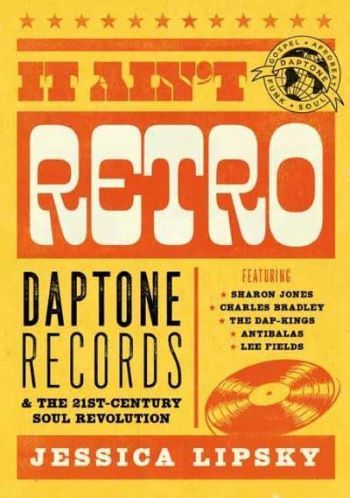 The unique and idiosyncratic  DAPTONE label is celebrating its 20th anniversary this year. The pandemic and various lockdowns have meant that celebrations have had to be low key but the anniversary is being marked by two very tangible commemorations. First, in October the label will be releasing a very special super soul revue live album recorded at Harlem’s famed Apollo Theatre (did someone mention James Brown recorded a seminal live set there too?). The recording isn’t new. The live performances were recorded between 4t-6th December 2014 and all the label’s big hitters took part (in-depth review here @ SJF very soon).

Secondly, Jawbone Press have just published a wonderful, detailed history of Daptone. The author is Jessica Lipsky and the book is ‘It Ain’t Retro – Daptone records and the 21st century Soul Revolution’. Ms Lipsky is a young(ish) US author who writes regularly about what Americans call “subcultures”. On her web site, apart from writing she also describes herself as “a content developer and strategist, developing marketing and social copy, as well as bios for executives, businesses and bands.” Busy Jessica, she also fronts a radio show and DJs when the opportunity crops up. Those facts and this 280+ page volume show that Ms Lipsky loves music in general and the Daptone sound in particular.

‘It Ain’t Retro’ skilfully winds together three threads – the history of Daptone (obviously), the brilliant and ultimately tragic careers of Sharon Jones and Charles Bradley and the impact Daptone has had on the contemporary US soul scene, encouraging a growth in other indie labels. Linking it all together is Ms Lipsky’s forensic approach which involved interviewing and relating the stories of a cast of thousands – Sharon Jones & the Dap-Kings, Charles Bradley, Naomi Shelton, Antibalas, The Budos Band, Menahan Street Band, Sugarman 3, Saun & Starr,  the Como Mamas and countless individuals who all contributed to the label’s evolution.

Key to the whole book is Gabe Roth. (pictured). His presence is (again obviously) omnipresent. Ms Lipsky skilfully relates how Roth first set up Desco records with French music dilletante Philip Lehman (the label named for a vacuum supply store near Lehman’s NY apartment). Inevitable opinion differences (a clash of egos?) meant the label folded leaving Roth with debts (explaining why sometimes he used the Bosco Mann alias … to avoid creditors, it seems)  and a desire to find a new home for a singer he really believed in – a certain Sharon Jones. So, in tandem with Neal Sugarman, Daptone was born. The name, it’s suggested, was a nod to a 1972 funk workout by Ernie and the Top Notes, ‘Dap Walk’.

‘It Ain’t Retro’ comprehensively traces the evolution of Daptone and it’s remarkable House of Soul studio, weaving in the tragedies of both Sharon Jones and Charles Bradley (Jones died in 2016; Bradley the year after). Ms Lipsky is also astute enough to acknowledge the part played by the UK in Daptone’s growth. First by relating how early Desco/Daptone music was espoused by top UK underground soul DJs and  then, of course, the role played by Amy Winehouse’s ‘Back To Black’ album, much of which was recorded at the House of Soul. It’s huge success (a Grammy no less!) encouraging other artists across genres to use the Daptone facilities – not always to Roth’s satisfaction.

The book is thorough, academic even. Anoraks though will spot a few mistakes – for instance, the Drifters didn’t record ‘Stand By Me’ while I’ve never heard Major Lance described as “a singer/songwriter”. Equally I don’t think Adele fans will relish her being described as a “British belter”! Let’s put the sprinkle of faux pas down to Ms Lipsky’s (relative) youth; they don’ t spoil the book, which is an unashamed tribute to a unique, pioneering label which “at its core is a soul generation who unable to find the music they wanted to hear, felt compelled to create it themselves  and share what they found” and to a driven individual. Right at the start of the book Roth sums up his philosophy: “I really personally never tried to be somebody I’m not. Or tried to emulate some music or tried to steal some history or tradition that I’m not part of. What I try to do is make records that sound good to me  and make honest records.”