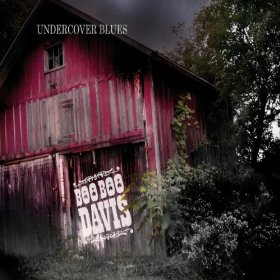 Boo Boo Davis is one of the last real blues men. Born in Drew on the Mississippi Delta, his father was a cotton farmer and part time musician who worked with people like John Lee Hooker and Elmore James when they were passing through. Young Boo Boo became proficient on guitar and harp and, aged just 16, he was soon touring the Delta with a family group dubbed The Lard Can Band. In the early sixties he relocated to St Louis and became a part of that city’s blues scene – working with Albert King, Chuck Berry and Ike Turner amongst others.

In 2000 he made his first foray into Europe where he quickly realized how much real blues was appreciated. Boo Boo soon became a mainstay on the European blues circuit; a deal with the Swiss label Black and Tan soon followed and ‘Undercover Blues’ is the man’s sixth album for the set up and it’s as uncompromising in its approach as the first five. Supported by John Gerritise (drums) and Jan Mittendorp (guitar) the Boo Boo sound is raw, loud and simple – an effect achieved by working in analogue and recording live – the whole album (12 tracks) was recorded in just six hours!

Musically, there’s a real feel of the early sixties to the album. The gutsy title cut is redolent of one his father’s old heroes –John Lee Hooker, while the harp on ‘Alligator Blues’ might recall Buster Brown’s ‘Fannie Mae’. Elsewhere ‘Turkey Walk’ has a rocky feel to it; ‘Don’t Drink And Drive’ has an unstructured flavour; and ‘Shoot The Dice’ offers a venom that’s a mix of Howlin’ Wolf and Willie Dixon. The set also boasts a seasonal song. Boo Boo’s ‘Xmas Blues’ is about as far removed from traditional Christmas music as anything you could imagine, but it should please blues purists fed up with Chris Rea’s pale efforts. Indeed the whole album would make an excellent Christmas stocking filler for said purists. For more information go to www.black-and-tan.com