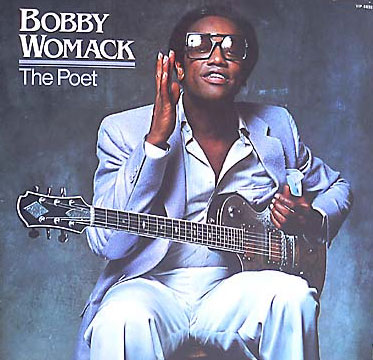 2021 marks the 40th anniversary of the release of BOBBY WOMACK’S classic long player, ‘The Poet’. The album is rightly celebrated as one of soul’s best ever – genre-defining even. What’s more it served to relaunch Womack’s career.

So, a little back story to the record. Through the late 60s and into the 70s Bobby had established himself as one of soul’s major players with a string of hits like ‘That’s The Way I Feel About Cha’ and ‘Understanding’ under his belt. By the late 70s and after a very poorly received country and western album, his career was in the doldrums. There were a variety of reasons – music tastes were changing, and the ever-unpredictable Womack had all sorts of personal issues. However, in 1981 record business exec Otis Smith, who was setting up his own label (Beverly Glen), decided to take a chance on him and the result was the magnificent 8 tracker that was ‘The Poet’. Released in November of that year, the album topped the Billboard R&B chart and re-established Womack as a major (if unpredictable) force in the soul firmament.

Smith was delighted that his calculated gamble had paid off, but he was soon to fall out with his reinvigorated star. By 1982 Smith and Womack were arguing over royalties and, inevitably, they ended up slugging it out in court. The judge, following the Marvin Gaye/’Here My Dear’ model, ordered the singer to make one more album for Smith’s label and after that he would be a free agent. The end result of the expensive legal wrangling was ‘The Poet II’ which was released in 1984.

To mark the initial release of ‘The Poet’ ABKCO are issuing the album alongside ‘The Poet II’ on delicious, heavyweight vinyl. And, if any sort of carrot was needed, it seems that these new issues have been remastered from the original tapes which were believed to have been long lost!

So, if you were to invest in these albums, what would you get for your money? Well, we said it up top – you’ll get two of soul’s finest ever albums – and that’s not just my opinion. Almost any music commentator would agree, and to paraphrase our most famous bard, age hasn’t withered anything on ‘em nor custom staled the infinite variety of both albums.

Both albums are brimming with soul classics. ‘So Many Sides Of You’, the first track on ‘The Poet’ is still a modern soul anthem while the three ballads on the LP’s second side (‘Games’, ‘If You Think You’re Lonely Now’ and the magnificent ‘Where Do We Go From Here’) are guaranteed to tug at even the tightest heart strings. Amongst the highlights on ‘The Poet II’ are the three ballads with Patti Labelle (‘Love Has Finally Come At Last’, ‘Through The Eyes Of A Child’ and ‘It Takes A Lot Of Strength To Say Goodbye’). Ms Patti was just one of many big names queuing up to work with Womack after the success of the first Poet album. Also playing on ‘The Poet II’ are George Benson, Wilton Felder, Michael Wycoff and Cecil Womack. While most of the core band from the first album were retained for the second – people like James Gadson, David T Walker and Paulinho de Costa. Little wonder the music was magnificent! But that magnificence is ultimately down to Bobby Womack. The songs are (chiefly) his, he’s the main producer and his world-weary, gospel-infused voice is the lead instrument.

These two historic albums packaged on LP and CD with extensive liner notes by top soul writer Bill Dahl, will be released on CD and LP on April 30th (19th March in US and Canada).