BOBBY WOMACK: ‘The Bravest Man In The Universe’ (XL) 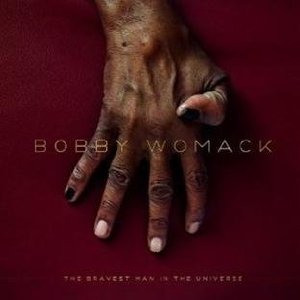 For many people, this writer included, Bobby Womack is soul music personified. Starting out in gospel music in the late-’50s and then defecting to secular music with his brothers in the guise of The Valentinos in the early ’60s, he established himself as a solo artist in the latter part of that decade. In the ’70s he was a regular visitor to the US R&B Top 10 and continued to rack up hit records in his native land right up until 1994. After that, Womack’s recordings became much less frequent. Up until this new album, the Ohio-singer’s gritty rasp of a voice has been virtually silent for twelve years (his last album was a Christmas CD released way back in 2000). But after years of waiting Womack fans have finally something to get excited about and they have the ex-Blur and Gorillaz main man, Damon Albarn, to thank for it. Albarn coaxed 68-year-old Womack – who was apparently deeply disillusioned with the music business – back into the studio after initially persuading him to appear on the Gorillaz ‘Plastic Beach’ album in 2010.

It’s evident from listening to this 11-track set that Womack – who’s nobody’s fool – returned to recording because he trusted Albarn: indeed, the stark, minimalist style of the album, whose musical backdrops are electronica-infused, clearly demonstrates that the singer had sufficient faith in Alban’s musical instincts to allow himself to record an album that was radically different from what he’d done before. So different, in fact, that he risked alienating some of his fan base. The upside is, though, that Albarn’s association has brought Womack back into the wider public consciousness (at the time of writing, ‘The Bravest Man In The Universe’ has already penetrated the Top 50 in the UK albums chart).

The set kicks off with the title track, which opens with Womack’s wonderfully craggy voice accompanied by a lone mournful cello. Then a throbbing, syncopated electro-dub beat kicks in as Womack continues to sing his story. A fleeting fragment of piano floats into the mix, followed by string chords and then a few slivers of guitar. The overall effect is haunting and the tension between the human aspect of the music – Womack’s voice – and programmed beats creates a compelling sense of drama. ‘Dayglo Reflection’ – featuring Lana Del Rey – has a similar trippy vibe but the album struggles to maintain the level of these two standout tracks (though Womack’s voice is magnificent throughout).

Twitching electronic pulses and lean arrangements predominate but oftentimes they seem to lack structure and cohesion, rambling in the background and leaving Womack’s voice painfully isolated. Long time fans of the man will find it uncomfortable listening and certainly, anyone expecting something along the lines of ‘The Poet’ or his previous work will be profoundly disappointed. So maybe Womack is the bravest man in the universe for taking a big career risk with this album. But even if he loses some of his most ardent devotees he will certainly gain some new (and younger) ones with this venture. It’s not the great album that some critics would have you believe but it’s a fascinating sonic experiment nevertheless. And, of course, it’s brought Bobby Womack back into the spotlight. Let’s hope he stays there.