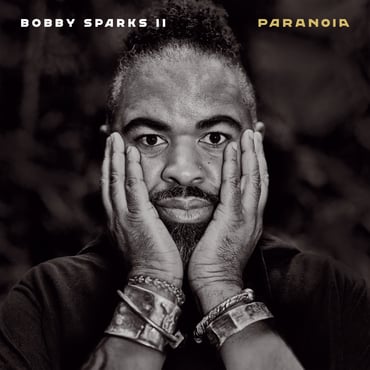 Bobby Sparks certainly doesn’t do things by halves; the Texas keyboard wizard’s debut album, 2019’s ‘Schizophrenia: The Yang Project,’ was a mind-bogglingly lavish double set whose scope and grandeur are more than equaled by this new opus, ‘Paranoia,’ a sprawling, 26-track musical odyssey that takes the listener through many different sonic landscapes – from jazz to fusion to R&B, gospel, funk, blues, hip-hop and beyond.

Its many stylistic shifts are dizzyingly eclectic, revealing its creator’s remarkable versatility and his ability to transform himself into a musical shapeshifter. Sparks’ guest contributors are also diverse; ranging from the honey-voiced soulstress Lizz Wright to the noted jazz guitarists Mike Stern and John Scofield plus bassist Pino Palladino, singer Chuckii Booker and the chromatic harmonica maven Gregoire Maret, to name a few.

The highlights are plentiful, ranging from brassy funk (‘Horny Dreams’) and combustible jazz-rock (‘Musical Diarrhea’) to an awe-inspiring gospel-influenced choral piece (‘Here’s One’ featuring a spoken narrative by Bishop Carlton Pearson accompanied by a choir) and even exotic Indo-funk in the shape of ‘Letter To Mumbai,’ featuring jangly sitars and vocals by Varijashree Venugopal. There are also a couple of Prince covers; the horn-heavy ‘DMSR’ fronted by Chuckii Booker – whom some soul fans will remember from his spell in the spotlight during the late ‘80s – and a beautiful retread of the ballad ‘Sometimes It Snows In April,’ the latter highlighting Lizz Wright’s exquisite vocals.

Jam-packed with high-quality musical content, ‘Paranoia’ is a substantial musical feast that runs for over two hours, but on the downside, it’s not easy to digest in a single sitting and maybe next time, Sparks, who’s undoubtedly a formidable talent, could try trimming his musical excesses – as enjoyable as they are – into a more easily digestible form. But then again, if you’ve got talent, you should certainly flaunt it; and that is something that Bobby Ray Sparks II does admirably.