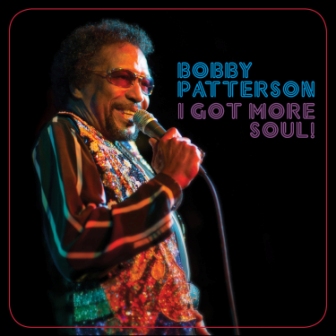 Bobby Patterson is one of the last real soul men. Born in Dallas back in 1944, he made his first recording in 1957 as a very young man but it was his work with Jetstar that brought him his first taste of fame. There, he scored hits with songs like ‘Let Them Talk’, ‘TCB Or TYA?’ and ‘How Do You Spell Love?’

When Jetstar folded Patterson went into production, working with people like Fontella Bass, Chuck Jackson Ted Taylor and Little Johnny Taylor. He continued to record in his own right too and his magnificent ‘If He Hadn’t Slipped Up An Got Caught’ remains a deep soul classic. Patterson has never stopped working live – chiefly in and around his native Dallas and his shows continue to be sell-out affairs as audiences thrill to Bobby’s no frills, old school soul revue. His current band leader is acclaimed guitarist Zach Ernst who admits that every time he plays with the veteran soul man, he’s astounded by his passion, commitment and remarkable voice which – even after all these years in the business – remains a thing of soulful beauty.

Determined to bring Bobby Patterson to a wider audience, Ernst got Bobby into the studio and the result is this fine, proper soul album which proves why Bobby’s never really been away. The set features plenty of up-tempo beaters- probably the staple of the man’s live shows. Stuff like the LP’s title cut and ‘Your Love Belongs Under A Rock’ are real old school throwback – fast and pacey with lots of parping brass figures. Much more subtle is the lovely ‘I Feel The Same Way’. This is a light breezy tune with the flavour of the great Sam Cooke about it, though, of course, Patterson’s gritty voice is very different to Cooke’s velvet.

The album also features a pair of southern style ballads and it’s great to know that ‘Let Me Heal It’ and ‘I Know How It Feels’ are keeping the genre alive. There are a couple of funk workouts too – a cover of Sly Stone’s ‘Poet’ (with lots of autobiographical references) and a feisty ‘It’s Hard To Get Back In’. Best cut though is the closing one… ‘The Entertainer’. This one’s a soul gem and though not the Tony Clarke song, it’s message is similar. This ‘Entertainer’ is semi-spoken and Bobby, with his usual heartfelt passion, explains what the music biz means to him and why he loves doing what he’s doing and why he’s done it for so long. The word-play is clever and the whole thing underlines why real soul music is so intoxicating.