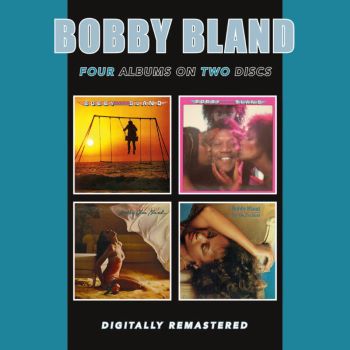 Bobby “Blue” Bland was a soul “one off”. He had a sound and style all of his own. Inspired, we’re told, by the gravelly, almost gargling fire and brimstone preaching voice of Rev. C L Franklin, Bland developed a sound that was always  melodic but sometimes almost explosive as he emphasised certain words, seemingly rolling them around his mouth in an occasional guttural fashion. His unique sound endeared him to many but, equally, many never quite “got” Bobby Bland. Maybe that explains the ups and downs of his career.

He began that career proper with Don Robey’s Duke label where  between 1957 and 1972 he raked up 42 hits. In 1973 the singer moved to ABC/Dunhill and enjoyed further success with the iconic ‘California Album’ and ‘Dreamer’ – both exposing Bland to a wider audience. By the mid-70s, though, his star had started to wane – hardly surprising. This was the age of disco – a sound that was anathema to Bobby’s art! He nevertheless continued to record  and his then labels (ABC and MCA) paired him with old school producers Monk Higgins and Al Bell in an effort to keep his name “out there”. Four albums  from that period –  1978’s ‘Come Fly With Me’, ‘I Feel Good I Feel Fine’ (1979), ‘Sweet Vibrations’ (1980) and 1981’s ‘Try Me I’m Real’ have just been reissued by BGO across 2 CDs delighting  Bland fans who know that  they’ve long been out of print.

In fairness some of the music here hasn’t travelled down time too well. In particular, the opening sequence on ‘I Feel Good I Feel Fine’. The first clutch of tracks represent Bland’s attempt to “do disco” – something, it’s  clear he wasn’t too keen on. Indeed on that album’s title track, he doesn’t even appear, leaving the vocals to a wispy femme chorus! That album, though, isn’t all as bad as that. The LP contained some strong ballads like ‘Someone To Belong To’ and, indeed,  across the whole collection it’s the ballads that offer the highlights. Amongst them the lovely ‘To Be Friends’ and ‘You Can Count on Me’ (from ‘Come Fly With Me’) and ‘Just You and Me’ (from ‘Try Me, I’m Real’). Two other highlights are sequenced together on ‘Sweet Vibrations’ They are the finger-clicker, ‘Soul With A Flavour’ and the bluesy ‘Special Kind Of Fool’. No coincidence that both were penned by Joe Scott – Bobby’s old sparring partner at Duke. The collection is also peppered with Bland’s covers of American standards like ‘Over The Rainbow’ and ‘I Cover The Waterfront’. All show that when presented with the right material Bobby Bland was a true soul and blues master!

Sleeve notes for this collection, by the way, come via my esteemed SJF colleague Charles Waring – so quality guaranteed throughout!