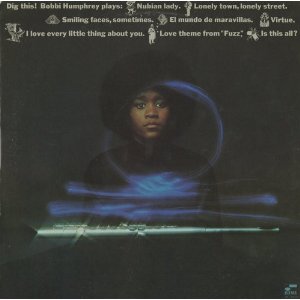 Flautist Barbara Ann ‘Bobbi’ Humphrey kicked off her career at Blue Note in 1972 and under the production aegis of brothers Larry and Fonce Mizell (aka Sky High Productions) cut four fine LPs for the label that melded jazz and funk with soul. She left the label in ’77, moving to major label Epic where she cut ‘Tailor Made.’ In ’78, she made this record, ‘Freestyle,’ which makes its CD debut thanks to ex-Blues & Soul scribe David Nathan’s Cherry Red-distributed reissue label. Its lead-off cut is the loose, funked-up party groove, ‘Home-Made Jam’ which features a stellar cameo from Stevie Wonder on harmonica (it also made the lower reaches of the US R&B chart and an extended version is also present on this expanded reissue). The killer cut for me, though, is the title song – a breezy offering led by Humphrey’s breathy flute whose vocal refrain boasts an addictive, funky undertow and reverberates with echoes of the Dallas musician’s outings with the Mizell brothers. This particular set’s produced by Ralph McDonald (also a noteworthy songwriter and ace percussionist) and features an impressive supporting cast of musicians; pianist Richard Tee, guitarist Eric Gale, Anthony Jackson and a young Marcus Miller on bass, with Steve Gadd manning the drum kit and background vocals from the likes of Gwen Guthrie, Vivian Cherry and Ray Simpson. The quality of the musicianship on offer, then, is unimpeachable and the set flows blithely from one smooth groove to another. What doesn’t quite work for me is Humphrey’s two lead vocals – on the mid-tempo ‘Good Times,’ and the slow, saccharine, ballad ‘I Could Love You More,’ where her high, almost fragile, voice doesn’t quite convince. Those, to my ears, are the only flaws on what is otherwise an attractive melange of soul, jazz and funk flavours.