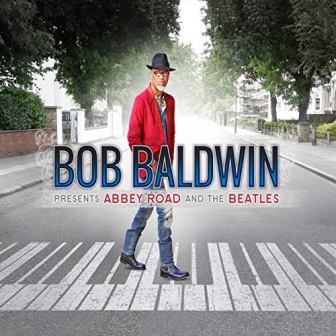 In the olden days, I’m talking the early 60s, time was when pop performers plundered the catalogues or R&B, jazz and early soul performers to beef up their own repertoires. Classic example, I guess, is the Beatles. The Fab Four’s early live sets were crammed with covers while their first long players were stuffed with their unique takes on soul, R&R and R&B. Then, of course, things changed. As soon as the lovable, Liverpool mop tops hit the biggest of big times – all kinds of artists queued up to cover their songs. For a period you couldn’t pick up a soul or jazz LP without enjoying a “new” version of a Lennon/McCartney or Harrison tune; why some even recorded whole albums of Beatle songs! And so it continues…

Late last year we mentioned an upcoming collection from jazz keyboardist, Bob Baldwin that was his particular take on the oeuvre of the Beatles. The set was heralded by a single – Bob’s interpretation of John Lennon’s ‘Imagine’ . Aiding and abetting the piano man here was smooth sax man Euge Groove and if you enjoyed the cut, you’ll be delighted to learn that the parent album has just won release and there’s plenty more to interest both smooth jazzers and Beatle fans. If you know the Baldwin/Groove take on ‘Imagine’ you’ll know it combines the melody with Louis Porzilli’s ‘Living As One’ – and that sort of sets the template for the whole album. You see what you get here are not precise covers; rather Baldwin’s reimaginings and here and there he even embellishes things with the addition of elements of other songs (as on ‘Imagine’). So, for example ‘Michelle’ is enhanced by Bob’s own ‘My Girl’ while ‘Yellow Submarine’ is welded onto Donovan’s ‘Mellow Yellow’.

The collection also offers three vocals – Ce Ce Peniston fronting ‘(Don’t Wanna Be)The Fool On The Hill’ (another embellished track and very EWF-ish) and Lori Williams on two cuts – ‘My Love’ and a totally new song – ‘Abbey Road’ – penned by Baldwin and Williams, it gets to name several of the best Beatles’ tunes. Like the whole album, It’s an interesting concept and a brave attempt to get away from “straight” Beatle covers. Beatle pedants, of course will tell us that two of the songs here – ‘My Love’ and ‘Imagine’ weren’t actually “Beatle” songs – they were, of course, McCartney and Lennon solo outings. But c’mon, music like this isn’t for pedants and everyone knows that the Beatles made a joyous music to be enjoyed not dissected and mulled over (though, sadly, all too often it is). Here, there’s plenty to enjoy and clearly Bob Baldwin has captured the spirit in which the music was originally made.