BO KIRKLAND and RUTH DAVIS: You’re Gonna Get Next To Me (Kent) 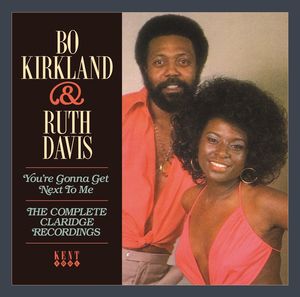 In the spring of ’77 the UK air waves and dance venues were graced with multi plays of an infectious little dancer called ‘You’re Gonna Get Next To Me’ from Bo Kirkland and Ruth Davis. Little was known about the duo – hardly surprising, since Bo and Ruth hadn’t sung together for vey long at all; indeed they both saw themselves as solo artists – forced to collaborate by their mutual label boss, Frank Slay.

Bo (Mike) Kirkland had been musically active since the mid 60s – both as a solo singer and as the lead in Mike and the Censations, releasing a dozen or so singles and a couple of LPs. (Soul anoraks will probably know that one of Kirkland’s songs from this era (‘Hang On In There’) was covered by John Legend on his 2100 ‘Wake Up’ album.) Real success eluded him, though, so in 1975 he was happy to sign with Frank Slay’s Claridge label. Ruth Davis (a sometime Ikette and ex member of the Sequins) was also on the roster.

Bo’s first single on Claridge was a disco lite effort called ‘Grandfather Clock’ and he was more than pleased to see it enjoy a run in the R&B top 100. Ruth’s first Claridge recording was a cover of the C&W hit ‘Easy Loving’ but Slay felt the version was lacking something; so, he called in Bo to add a male part and the pairing of Kirkland and Davis was born. Slay’s hunch worked. The tune was a hit and naturally Slay now wanted to develop the singers as a proper duo. The pair hastily recorded an album and though their second single, ‘I Feel Love In This Room Tonight’ failed,a third 45 – the aforementioned ‘You’re Gonna get Next To Me’ – took off and flew – especially after its massive success in the UK.

On this new 16 tracker, UK reissue specialist, Kent, bring together all the tracks that Kirkland and Davis cut for Claridge. It includes their album, of course, along with a smattering of singles they cut both as a duo and as solo artists.

‘You’re Gonna Get Next To Me’ still stands out. OK, it’s a little trite but it does have its own special infectiousness. The unsuccessful single, ‘I Feel Love In This Room Tonight’ has a peculiar charm too while the country song ‘Easy Loving’ is worth checking, as is the cover of Dobie Gray’s ‘Loving Arms’.

Elsewhere it’s all just a little too polite and in places MOR; but for 70s collectors the retrospective will have those old memories flooding back.