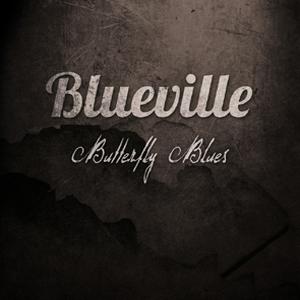 Blues fans regularly bemoan the fact that little new blues music is being recorded. Well, those in the know have realized that in fact the blues is still alive and (reasonably) well and being recorded in what purists might consider unlikely places… most notably in Continental Europe. A number of US blues men have made a home from home in Europe – playing the numerous festivals there and recording for the small, indie labels who are keeping the spirit of the blues alive. Equally, countless young European musicians are turning to the authenticity of the blues as an antidote to the sterile, electronic music that has sadly become all too commonplace.

One such group of musicians is the Italian band, Blueville. The band was formed in 2006 and its nucleus consists of two fiery guitarists –Mario Percudani and Marco Tansini. They’re joined by keyboardist Paolo Negri, Gianni Grecchi on bass and drummer, Angelo Roveda. For this, their debut album, they’ve augmented their sound with a horn section, a gospel choir and some great guest vocalists. Of those, Sheritta Duran really shines on ‘Misery’. It’s a slow drift of a song on which she duets with Percudani and though it owes something to the classic ‘I’d Rather Go Blind’ (especially in its opening sequence), it’s outstanding. Elsewhere, it’s chiefly hard-rocking blues all the way with the two guitar men seemingly battling for centre stage. The two cuts that stand out as offering something a little different are ‘Every Year Of My Life’ and ‘Blues From The Edge Of Town’. The former is a lazy, building song that features the New Sisters Choir, while the latter’s the poppiest item on offer. It reminds me a lot of the Zombies’ 60’s anthem ‘She’s Not There’… and nothing wrong with that. It serves as a kind of relief to the unrelenting, guitar-led attack blues of the rest of the album.

You can find out more about Blueville and their projects by visiting www.myspace.com/bluevillemusic