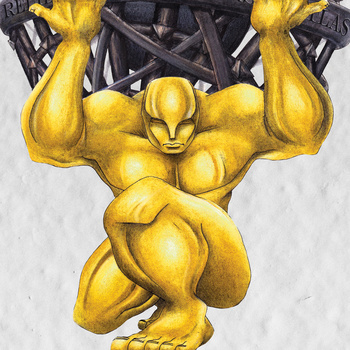 Blue Food are a 7 piece funk band from New Jersey. They first played together in 2009 and they take their name from a US comedian’s routine about coloured food! They say that their music is a cross between Led Zeppelin and Stevie Wonder and listening to this, their debut long player, that’s a pretty accurate description (maybe more Zeppelin than Wonder though). Throughout the 11 tracker you can also hear flavours of Frank Zappa, Funkadelic, James Brown and Rush… so don’t expect a traditional funk set – but do expect a hard-hitting, in-your-face experience that starts with the heavy bass intro of ‘Boogiemen’. The song then breaks out into a brassy funk workout that has a hint of the classic ‘Vehicle’ from The Ides of March about it. The vocal, from Angel Eduardo, takes no prisoners – setting the pattern for the rest of the album. Throughout the vocals are aggressive –matching the menacing guitar slashes of Mile Ungar. Ungar is particularly unrestrained on the closer ‘The Revolution Will Be CGI’ – much more heavy metal than soul or funk.

Soul and funksters will find it easier to get a handle on the sparse and brassy ‘Chef!’ while ‘Alchemists’ is another choppy roustabout. ‘Tête A Tête’ and ‘Waterwalking’ are looser and jazzier while ‘Seeds’ is the most restrained song on the set, prefaced as it by an unusually quiet– almost pastoral – instrumental, ‘Mamihlapinatapai .

Don’t come to ‘Engines’ expecting an easy listen… the song/tune titles should be telling you that. And, as we’ hinted at up top the music is as challenging as the message. However, if you have adventurous ears, you can discover more @ www.bluefood.com