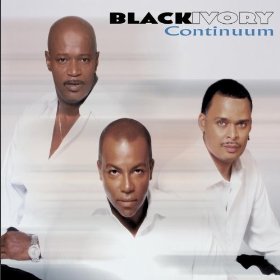 Black Ivory were a Harlem-based, 70s sweet soul trio – Leroy Burgess, Stuart Bascombe and Russell Patterson. Their biggest hit was 1972’s ‘Don’t Turn Around’ but despite more classy cuts (and a series of decent LPs) the hits dried up and by 1980 the core trio had disbanded. Patterson tried to keep the name alive by touring with pick up singers while Burgess became something of a cult figure on the then emerging dance scene (much of his back catalogue from that period has recently been reissued). At the same time Burgess and Patterson worked together at Salsoul under the name Logg.

In the early 2000s that duo teamed up again with Bascombe and Black Ivory were reborn. They performed regularly and recorded sporadically… and ‘Continuum’ is their latest release. The 11 tracker is slick and polished and for an indie soul set, production values are high. The songs are all originals and throughout the harmonies are superb… testament to the group’s experience, longevity and familiarity with what each member can offer.

The best cuts on the LP are the ballads and the mid-tempo items with the soft soul slowie ‘Back Home’ taking you right back to the group’s 70s heyday. Best of the mid-tempo items is the opener, ‘Like Falling’. It’s sweet and gentle … proper, mature, uptown soul if you would. ‘Lucky Tonight’ and ‘The Move’ offer more of the same – sophisticated and never too forced. Dancers will probably go for ‘Don’t Need No Rehab’. The tight beats are a reminder of Burgess’ house days though there’s a pleasing restraint about matters. ‘He Said She Said ‘is a play to the steppers’ market… but maybe it’s just a little too laid back to get through. Equally Burgess’ ‘Ghost’ is just a tad too experimental while Bascombe’s ‘Looking For Love’ also lacks real focus. Still, good to know that veterans like Black Ivory are still out there daring to record new material rather than live on past successes. Catch up with the trio @ www.BlackIvory.com