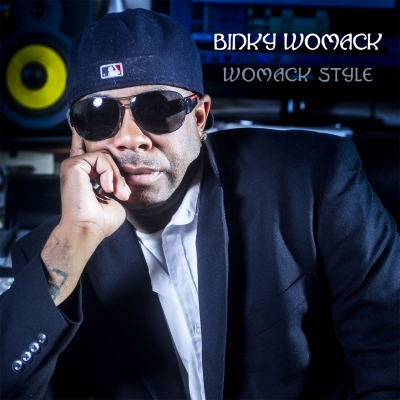 Binky Womack is the scion of a legendary soul clan. More specifically, he’s the nephew of Bobby Womack and with music in his DNA he runs his own studios in Burbank, California. There his recording/production credits include work with 2Pac, George Clinton, TLC, Usher, Smokey Robinson, and Uncle Bobby. From time to time he makes his own records and this latest 12 tracker is his homage to the man.

The majority of the songs are originals but there are two Bobby Womack covers…. his ‘I’m In Love’ and ‘Put Something Down On it’. The former is respectful and more or less tracks the original which is more than I can say for the latter. Binky sets the ‘Facts Of Life’ song into a rock context and, sadly, it doesn’t work. I’ll pass on it. The album’s other cover is (oddly, I think) a version of John Mayer’s ‘Gravity’ but it’s given a Bobby Womack style treatment complete with scorching guitar and short spoken intro.

There’s one more cut with a very specific Bobby Womack link. It’s ‘When You’re Wrong’ which we’re told Binky recorded on Bobby just before his death but for contractual reasons Bobby’s vocals had to be erased. What we get here is Binky’s vocal over a rather pedestrian song.

The rest of the songs on the album shows flashes of inspiration as Binky tries to grab some of his uncle’s magic but the long player lacks one big, big tune. Even the presence of Snoop Dogg on ‘Love Addict’ can’t rescue a mundane effort, but I’m sure Bobby Womack completists will want to grab a listen. Maybe they’ll enjoy ‘Me And My Guitar’ on which Binky relates how when Uncle Bobby gifted him a guitar it helped him cope with life ahead….aah!