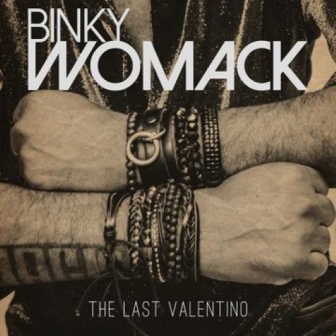 Binky Womack is the scion of a legendary soul clan (the clue’s in the name!).  Specifically, he’s Curtis Womack’s son and, naturally, the nephew of Bobby Womack. With music in his DNA, he runs his own studios in Burbank, California. There, his recording/production credits are varied and impressive. They include work with 2Pac, George Clinton, TLC, Usher, Smokey Robinson, and Uncle Bobby who, we’re told, once gifted him one of his famous guitars.

From time to time Binky makes his own records. The last we remember is 2017’s ‘Womack Style’ (he released a ‘Next Of Kin’ in 2018 but we didn’t get to review that one) and now he’s released a new collection, ‘The Last Valentino’ – still trading on the family connection. (The Valentinos, of course, was the Womack brothers family group). But why not?

On ‘Womack Style’ Binky included two Bobby Womack covers. Here, billed as a “Valentino” he offers a cover of arguably the Valentinos’ most famous song… ‘It’s All Over Now’. The original was a rough enthusiastic romp (a hit of course for someone called The Rolling Stones!) and here Binky keeps things rough and rugged – an age away from the original; but sonically not that different!

The album’s other big cover is a take on Curtis Mayfield’s ‘Let’s Do It Again’. It’s probably best known in the Staple Singers’ version and for his version Binky doesn’t stray too far from that template. Helping him deliver is Lisa Love who adds some sweeter shadings to Binky’s gritty, definite Womack style vocals. Hear that Womack sound at its best on the album highlight, a tough and soulful ‘Keep On Walking’ which really does capture the classic Bobby Womack sound. ‘Hit Me Up’ and ‘You’re My One And Only’ get close to that too.

We believe that this album is available now.