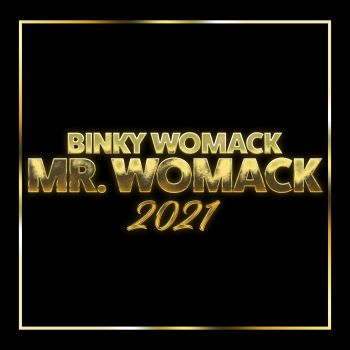 Binky Womack is (c’mon, you should know by now) part of the legendary Womack soul clan. Specifically, he’s Curtis Womack’s son and, naturally, the nephew of Bobby Womack. Clearly Binky has soul music in his DNA. Moreover, he runs his own studios in Burbank, California. There, his recording/production credits are varied and impressive. They include work with 2Pac, George Clinton, TLC, Usher, Smokey Robinson, and dear Uncle Bobby who, we’re told, once gifted him one of his famous guitars.

Having easy studio access makes recording a simpler process and Mr W is therefore fairly prolific. His last full album was last year’s ‘The Last Valentino’ – a title that traded on his old family group’s first recording name.  And skilfully  on that set Binky managed (in places at least) to recreate the gritty Womack sound – best heard on ‘Keep On Walking’. He also offered a cover of (arguably) the Womack brothers’ most famous song ‘It’s All Over Now’.

The busy Binky now follows up ‘The Last Valentino’ with ‘Mr Womack 2021’, sensibly keeling that famous name out front. The album was heralded with the single  ‘Vitaman B’ (yes, that’s the spelling on the label!). It was lush and sensuous with vocal support from the Womack Sisters (daughters of Cecil and Linda Womack). The biting guitar, the gruff lead vocal and the  catchy melody all echoed Uncle Bobby.

You can hear why Binky chose ‘Vitaman B’ as the lead single for ‘Mr Womack 2021’. In short, it’s by far the best track on the brief seven tracker. Indeed, the album gets off to a real lack lustre start with ‘A Little Bit Of Your Love’. It features odd instrumentation (is that an old Casio keyboard playing the riff?) and things, sadly don’t get to much better. The other songs lack a similar focus, meandering from verse to verse. What saves things (to some extent) is Binky’s gritty vocals in which you can hear the famous Womack DNA. Witness it at its best on this collection on the country tinged ‘Give Me a Chance’ and of course, the aforementioned ‘Vitaman B’.