BILLY PAUL: Me and Mrs Jones – The Anthology (SoulMusic Records) 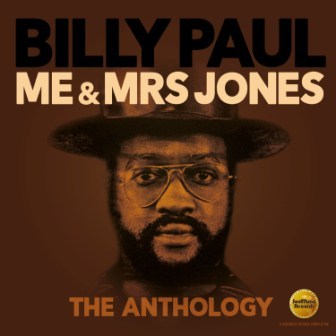 There are certain, very special records that you remember exactly where and when you first heard them. One such is Billy Paul’s epic tale of secret love and clandestine passion, ‘Me And Mrs Jones’. I won’t bore you with the details save to say that since 1972 the song’s never failed to amaze, enthral and bring on the goose bumps and it’s impossible to say why. The storyline, the melody, the production, the instrumentation, the vocal? Who knows … and indeed who cares! ‘Me And Mrs Jones’ is one of those very rare recordings where everything works perfectly – including the wonderfully sensitive vocal from Billy Paul. Back in ’72 we didn’t know anything about Billy Paul; soul buffs knew a little about the writers/producers, Kenny Gamble and Leon Huff and their flagship label, Philadelphia International Records… so a little research was needed. Even without the internet we quickly learned that Billy Paul was a jobbing Philly jazz singer and that he’d worked with Gamble and Huff in the late 60s and when they set up PIR, he was one of the first artists they signed up. We also learned that ‘Me And Mrs Jones’ was recorded as a filler for Billy’s ‘360 Degrees Of Billy Paul’ LP but when it was released as a single it rightly became a worldwide hit, earning Billy a Grammy for Best Male R&B Vocal Performance. The singer went on to release 8 studio albums and 1 live set for PIR and I’m guessing that most proper soul fans will have many of those albums – or at least selections from them

However, if you need an introduction to the art of Billy Paul, this new 2 CD, 31 track collection from SoulMusic Records will serve as an excellent primer, pulling music from right across his PIR catalogue. All the hits are here, of course… naturally THAT song but also Billy’s version of Paul McCartney’ ‘Let ‘Em In’ (now featured in a lottery TV ad), ‘Am I Black Enough For You’ and 10 other charting singles. There’s also plenty of classy album tracks that together show that Billy Paul (aside from ‘Mrs Jones’) was also a powerful purveyor of musical messages – many of which still resonate.

The collection comes with insightful sleeve notes and a personal reflection from SoulMusic’s David Nathan.