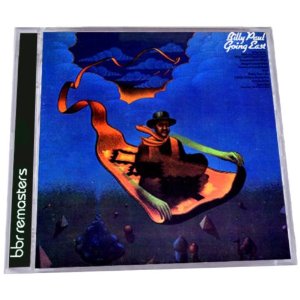 In all the ballyhoo surrounding last year’s Philadelphia International 40th anniversary one key album seemed to get overlooked/omitted. That long player was the first full album released on Kenny Gamble and Leon Huff’s iconic label – Billy Paul’s ‘Going East’. Jazz singer Paul had been associated with Philly’s dynamic duo since 1968 when he recorded one album each for the Gamble and Neptune labels. Logical, therefore, that when Kenny and Leon started a much bigger venture, that Billy Paul should be part of the package. Released in the Autumn of 1971, Paul’s ‘Going East’ had the honour of being the very first album on Philadelphia International and just a year after the big anniversary celebrations it gets a reissue courtesy of bbr Records.

The album – though maybe not typical Philly fare – is a typical Billy Paul set. That’s to say it’s an eclectic mix of jazz, spiritual pop and Billy’s quirky take on soul. The jazz cuts include ‘East’ (originally a 1967 sax instrumental by D B Shrier), a version of Gene McDaniels’ ‘Compared To What’ (into which Billy melds gospel favourites like ‘Wade In The Water’) and a cover of Rodgers and Hart’s ‘There’s A Small Hotel’. The pop songs number a take on Steppenwolf’s rocky ‘Magic Carpet Ride’ and a lovely version of Jimmy Webb’s ‘This Is Your Life’ while there’s great soul in the shape of Ronnie Dyson’s ‘(If You Let Me Make Love To You Then) Why Can’t I Touch You’ and the set’s only Gamble and Huff song – ‘Love Buddies’ – which in some ways points towards ‘Me And Mrs Jones’.

The embryonic MFSB are in fine form throughout proceedings. Thom Bell and Bobby Martin lend helping hands too and for Philly collectors this key release is a must, though the three bonus cuts (single edits of the 45s issued from the album) add little. Equally, though the sleeve notes set the context, there are a number of mistakes (like crediting the string arrangements to Sam Renaldo rather than Don Renaldo). I guess that’s what comes from commissioning non soul writers to write specialist soul notes.