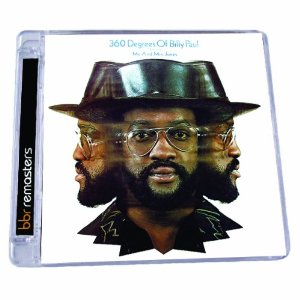 bbr (Big Break Records) are doing a great job reissuing classic Philadelphia International albums… and none come more classic than this one, the LP that launched one of popular music’s most enduring, readily identifiable and iconic songs – the still remarkable ‘Me And Mrs Jones’. The one-in-a-million-song was composed by Kenny Gamble, Leon Huff and Cary Gilbert and when the Philly bosses were looking for one final song for what was to be Billy Paul’s second long player for the label they asked him to cut the tune. At first he wasn’t keen but after some gentle persuasion the jazz man recorded it at a slower speed and a lower volume than he actually wanted to. The result, of course, is history. The beguiling tune, which despite gloriously celebrating infidelity, went straight to #1, eventually going on to win a Grammy and transforming a respected jazz stylist into a pop star overnight.

Perfect as it is, ‘Me And Mrs Jones’ isn’t typical of the album. Indeed it was only recorded as something of an afterthought. The original concept of ‘360 Degrees Of Billy Paul’ was to highlight his jazz credentials via a mix of politically powerful “message songs” and souped-up, meandering covers of well-known tunes.

The three covers are versions of Elton John’s ‘Your Song’, Al Green’s ‘Let’s Stay Together’ and Carole King’s ‘It’s Too Late’ and Billy does a wonderful job on all three. His reading of ‘It’s Too Late’ is particularly insightful and – by coincidence or design- it’s a perfect foil for the track that follows…. yes, ‘Me And Mrs Jones’.

The “message songs” are all Gamble-Huff compositions and ‘Brown Baby’, ‘I’m Just a Prisoner’ and ‘Am I Black Enough For You’ show the “aware” side of Philadelphia International that the executive pair were keen to promote in 1972. The album was completed by a sweet ballad – ‘I’m Gonna Make It This Time’. A typical ’72 Philly confection, Paul wanted it as the follow up to ‘Me And Mrs Jones’ but Gamble and Huff went with the didactic ‘Am I Black Enough For You’. Unsurprisingly that one wasn’t a massive hit (making just #79 on the pop chart); the punters wanted more of the ‘Mrs Jones’ stuff and if you do then this reissue release offers two bonus versions of the song – the single edit and a 9 minute plus, live version… perfect, timeless soul music in whatever incarnation.