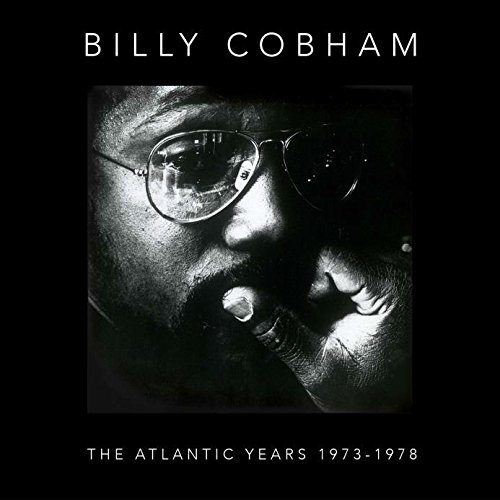 Born in Panama and raised in the Big Apple, William E. Cobham Jr started out as a young jazz drummer in pianist Horace Silver’s band before being caught up in the jazz-rock explosion of the early ’70s. After the acrimonious disintegration of the first incarnation of the groundbreaking Mahavishnu Orchestra, Cobham left to launch his solo career in 1973 for Atlantic Records. His five-year tenure with the label is represented by this superb chronologically-sequenced 8-CD box set, comprising five studio albums (‘Spectrum,’ ‘Crosswinds,’ ‘Total Eclipse,’ ‘A Funky Thide Of Sings’ and ‘Inner Conflicts’) and two live sets (‘Shabazz’ and ‘Live On Tour In Europe,’ the latter a collaboration with keyboard maven George Duke).

‘Spectrum’ put Cobham on the map as a band leader and also, more importantly perhaps, showed that he was a serious contender in the jazz-rock/fusion arena. From his stint with Miles Davis in 1970, Cobham learned the value of surrounding himself with good musicians and on ‘Spectrum’ he had Czech-born Jan Hammer on keys (the two had played together in Mahavishnu) and rising guitar star, Tommy Bolin, plus saxophonist Joe Farrell. ‘Stratus’ – whose juggernaut drum and bass groove was later sampled by Massive Attack for their hit ‘Safe From Harm’ – is the killer cut but there are other highlights too, including ‘Red Baron’ and the blithely flowing Le Lis. Cobham found a substantial, eager audience with ‘Spectrum’ – it topped the US jazz charts and made #26 in the US pop albums chart – and its follow-ups, ’74’s ‘Crosswinds’ (which showcased a new band with George Duke on keys, guitarist John Abercrombie, bassist Alec Blake, and the Brecker brothers on horns) and ’75’s ‘Total Ecipse,’ both packed with fusion-fuelled grooves, crossed over into the R&B charts. In a live context, the power of Cobham’s volcanic, virtuoso drumming was even more apparent and it was no surprise that Atlantic issued an in-concert LP, ‘Shabazz,’ recorded on tour in England and Switzerland in ’74.

It was back in the studio for ‘A Funky Thide Of Sings,’ which spotlighted a new, young guitarist, John Scofield, and showed Cobham going in a funkier direction (with ‘Thinking Of You’ being its standout cut). 1976’s ‘Life And Times’ was even better, another solid set blending turbo-charged funky jazz-rock tropes with sedate ballads.The same year ‘Live On Tour In Europe’ documented the drummer’s European sojourn with George Duke but a year later, when Cobham unleashed ‘Inner Conflicts,’ by that time his music – and fusion in general – was experiencing the law of diminishing returns combined with a shrinking audience. Despite that, ‘Inner Conflicts’ is a decent set, packed with funky grooves (with Alphonso Johnson providing bass) though its opener is radically different: a filmic, futuristic 10-minute-long interface between drums and raspy, bubbling synthesisers (both played by Cobham).

In addition to eight full albums – all presented in mini-replica LP sleeves –  there are twelve bonus tracks in the box set, including studio outtakes, single edits and the A and B-side of a 1976 Atlantic single (‘Do What Cha Wanna’ and ‘Hip Pockets’) by the funk/soul band, Natural Essence that Cobham produced. To satisfy the anoraks, all of the musician credits can be found in a thick accompanying booklet, which also includes a liner note essay.