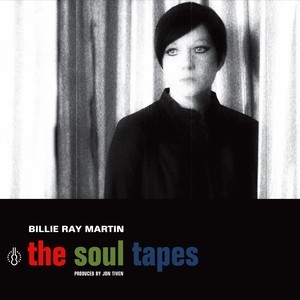 Billie Ray Martin is a German singer who’s probably best known for her pioneering work in European house and electro music. However, she’s always harboured a passion for soul and in 2001 she travelled to Memphis to record her ’18 Carat Garbage’ album. Now some 15 years later she follows that with what she calls her “pure soul album” and we’ll leave you to decide if her description is right or not.

All we’ll say is that ‘The Soul Tapes’ (produced by the famed blues and soul producer, John Tiven) is not your conventional old school soul album. Sure there’s lots of Memphis and Muscle Shoals flavours sprinkled generously through the 9 tracker and Billie Ray even covers two proper soul classics – Ann Pebbles’ ‘One Way Street’ and the O V Wright/Otis Redding standard ‘That’s How Strong My Love Is’ (oddly the press release calls that one “a Rolling Stones classic”!) and she acquits herself well on both – more so on ‘One Way Street’. Amongst the other soul highlights is ‘Strongheaded Woman’ – a mid-tempo roller that recalls the best of Willie Mitchell’s Hi while the storyline lyric (Las Vegas slot machine addict meets Rhinestone cowboy) is straight out of the country/soul bag. ‘The Long And Lonely Fall’ offers more of the same.

Elsewhere there’s a selection of tortured southern-flavoured ballads like ‘Your Ghost Is Right Behind Me’ but Ms Martin doesn’t quite get them to ignite in the way that, say, Candi Staton can.

Then there are the tunes we can file under quirky…. and none quirkier than ‘Skin On The Wheel Of Time’. This is essentially a rocky rumble built on Bo Diddley’s rhythms and fuelled by some wild harmonic and wilder wailing. I’m told that Billie Ray didn’t like this song but went ahead and recorded it! Whatever, I can’t think of any the soul crowd I know calling this “soul”; ditto ‘The Glittering Gutter’ which is as enigmatic musically as the title.

Billie Ray Martin’s ‘The Soul Tapes’ is out now and she’ll be appearing at the Jazz Cafe this Friday, May 20th