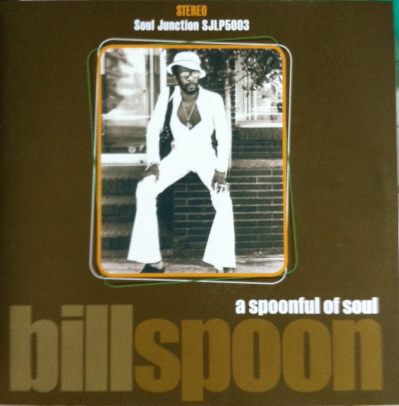 Alabama’s Bill Spoon is one of soul’s underrated journeymen. Since the 60s he’s worked consistently -both in the group context and as a solo performer and he’s been signed to numerous labels, most notably Stax – though nothing was ever released during that particular association. Last year Soul Junction records picked up one of his 80s recordings – ‘I Can’t Wait (Until The Weekend)’ and released it as a vinyl only 7″. The positive response to the Los Angeles-made track encouraged the label to seek out more of Bill’s work and the result is this lovely ten track retrospective that proves that Mr. S just needed a lucky break to make it out of the also rans and into the major league.

The aforementioned ‘I Can’t Wait’ is clearly the LP’s standout cut – a great modern soul roller with a lovely melody and passionate vocal. Bill’s voice is superb – the classic male soul baritone and when the Temptations were looking for leads (as they often were after the Ruffin/Edwards years) they could have done far worse than audition Bill. The LP boasts two versions of the song – the “original” take and a twin-tracked, alternate mix and there’s little to choose between the two. The other big tune is ‘Love Is On The Way’ – our man’s most commercially successful recording and for some time now an in demand item on the modern soul scene. ‘Be Concerned ‘ is another great track. The song is most usually associated with Al Wilson though in the sleeve notes here it’s claimed that Spoon’s version was recorded in 1974 – two year’s before Wilson’s. The chronology is immaterial – the tune is a lovely mid-tempo swayer. ‘I’ll Always Love You’ and ‘After All We’ve Been Through’ show that Bill was a dab hand at the ballads too (shades of Jerry Butler about both) but my guess is that you’ll keep coming back to either version of ‘I Can’t Wait (Until The Weekend)’. If you want to investigate – and it’s recommended – you need to act quickly. The album is only being issued as a limited edition vinyl long player. For more details go to www.souljunctionrecords.co.uk