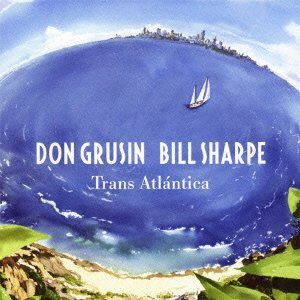 Bill Sharpe is the nucleus of Shakatak and he first worked with award winning composer and pianist Don Grusin in 1997 when the American produced the British keyboardist’s debut solo set, ‘State Of The Heart’. Fast forward ten years for the release of their first album as a duo – ‘Geography’. Critically acclaimed, it was a strong seller on the smooth jazz charts and a follow up was always on the cards. For all kinds of reasons (mainly work commitments) that album has only just been completed and ‘Trans Atlantica’ (as you would expect) continues the feel and structure of ‘Geography’. That’s to say it a mixture of edgy, atmospheric jazz with smoother, easier on the ear sounds garnished with a sprinkling of vocals.

The album’s big vocal is ‘Down At St Catherine’s’. It’s a Don Grusin composition with the lyric penned by the vocalist, Ashley Miller. It’s a busy, electro tune and the lady’s tricky vocals perfectly match the oblique lyrics. By and large the album’s edgier moments – like this, ‘The London Tube’ and ‘War Zone’ are the work of Grusin, while Sharpe’s best moments, as you might expect, have a real Shakatak feel to them. Best of that bunch is ‘Chance Encounters’. It’s a classic piece of smooth jazz – very, very easy on the ear. Grusin’s ‘After Hours’ and ‘Night Train To Paris’ are surprisingly easy too – with that last one, in, particular echoing the great Bob James. It’s all atmospheric stuff and as a special bonus the album comes double packed with a complimentary CD featuring the duo’s first album together. ‘Geography’ – as you’ll hear – offers much of the same, but great to hear Jill Saward on that one. She leads the vocals on ‘You’re In Love’ – prime time Shakatak.