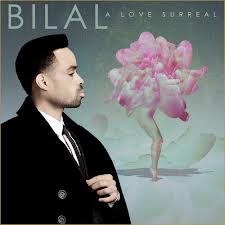 Philadelphia’s Bilal debuted in 2000 with ‘Ist Born Second’ on Interscope – an album that’s now regarded as a classic of burgeoning neo-soul… no wonder comparisons were made with D’Angelo and Maxwell. He recorded a second set – ‘Love For Sale’ – but protracted wrangles with the label meant that it was never officially released – though neo-soul collectors treasure their bootleg copies. Bilal’s “name”, though, earned him high profile work with people like Beyonce, Musiq Soulchild, Clipse and Jay Z. In 2010 Bilal recorded another album – the oddly named ‘Airtight’s Revenge’ for which he picked up a Grammy nomination for the song ‘Little One’. His subsequent work with long-time collaborator, Robert Glasper, earned Bilal more plaudits…so last year he went back into the studio to record an EP inspired by the work of surrealist artist Salvador Dali – but, so focused was he, that he ended up with a full album that’s just won release via bbe Records.

Bilal fans will be surprised by the soundscape on ‘A Love Surreal’. Where the man’s previous efforts were solid, tight – dense even; this one’s vague, unfocused and ethereal – sonic dreams, if you would, to match the painted dreams of the Catalan maestro. Best examples are the slow, drifting ballads ‘Never Be The Same’ and ‘Butterfly’ – with that last one boasting enchanting piano courtesy of Glasper. ‘Slipping Away’ is another hazy, unfocused ramble. Elsewhere ‘Lost For Now’ has that fashionable folk-rock feel about it while ‘Right At The Core’ is the set’s dramatic set piece.

The album’s most accessible cuts come right at the start. ‘West Side Girl’ is a throwback to the genesis of neo –soul, ‘Winning Hand’ is a bassy, bumpy ride while ‘Back To Love’ is ultra catchy… loose, laid back and jazzy. It’s easy to hear why it’s been chosen as the lead single. That said though it’s not your standard chart fare. Like the rest of the set, it’s not a properly easy listen but persistence will bring its own rewards.