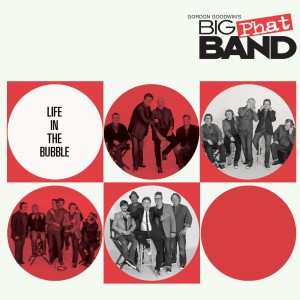 The Big Phat Band is the brainchild of Grammy-winning musician Gordon Goodwin. Wichita-born Goodwin learned sax and piano as a child and in his teens he played in a number of bands across a variety of genres. After school he worked in the music department at Disneyland, graduating to composing music for various Disney TV shows. Goodwin then went on to work with people like Johnny Mathis, Ray Charles, Natalie Cole, Mel Torme, Sarah Vaughan and Quincy Jones before getting back into TV and movie scores. ‘Get Smart,’ Armageddon’, ‘Gone In 60 Seconds’ and ‘The Incredibles’ are amongst his film credits. But performing live always beckoned and in 2000 he put together his first Big Phat Band and, naturally, records followed. Now in their 14th year, ‘Life In The Bubble’ is actually the 18 piece outfit’s eighth studio album and like their previous recordings, the music is a swinging mix of the big band sounds of the 40s and a very contemporary vibe. And as ever there are a few surprises.

And the biggest surprise comes right at the start with the LP’s rollicking title cut. ‘Life In The Bubble’ is heavily syncopated and funkier than anything the Phat boys have recorded before. Combining a variety of rhythmic textures, it’s groove heavy throughout and features a fine tenor sax solo from Brian Scanlon. The set’s final cut – ‘Party Rockers’ – is another that will surprise the band’s fans. This one’s a no-hold-barred vocal cut with Judith Hill up front. Goodwin describes the tune as “a relentless groove” and it’s certainly wilder than anything else on the album.

Cuts like ‘Why We Can’t Have Things’, ‘Years Of Therapy’ and ‘The Passage’ represent the more “accepted” face of the Big Phat Band while a new recording of the theme to ‘Get Smart’ shows the outfit’s playful side. The tune was originally written for the 60s TV spoof spy show ‘Get Smart’ and in 2008 Goodwin re-arranged it for the big screen adaptation. Here they revisit it and the interplay between Eric Marienthal’s sax and Wayne Bergeron’s trumpet is an album highlight as too is the cover of ‘On Green Dolphin Street’ which Goodwin uses a tribute to one of his piano heroes- Oscar Peterson.

‘Life In The Bubble’ is released in the UK on May 26th.