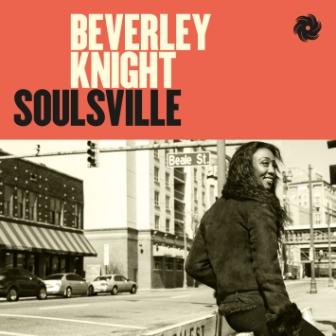 Midst much media attention Beverley Knight has just released this, her first album for something like five long years! Mind you in that hiatus Brum’s finest has been busy, busy. For starters, she’s starred in a couple of sell-out stage shows. For one those shows, ‘Memphis’, Bev travelled to Tennessee’s soul capital for a spot of musical acclimatisation and she vowed that when she found time to record a new long player, Memphis had to be THE place to do it.

So last February Bev and her team decamped to Memphis for a week long session in Willie Mitchell’s famed Royal Studios and with producer Justin Stanley (CV includes work with Beck and Prince) and engineer Boo Mitchell (Willie’s son) they set to work. For session men they rounded up the best of the Memphis soul mafia – including brothers Leroy and Charles Hodges on bass and Hammond respectively. Bev says; “As soon as I walked into Royal I knew I had to record an album there. It had such a great vibe and it turned out the best recording experience I’ve ever had.”

We’ve been listening to the album for a few weeks now and we’re pleased to concur. Beverley’s “best recording experience” has produced “our best and certainly most soulful listening experience of Beverley”.

Why? Well three reasons really. Firstly Beverley’s gospel-reared voice has never sounded more passionate; secondly she’s chosen some proper soul songs while the originals fit the classic soul template; thirdly, the players understand what soul is… they play it like it should be!

Highlights? Well there are plenty – especially amongst the well chosen covers. Bev treats stuff like ‘I Can’t Stand The Rain’, ‘Hold On I’m Coming’ (a duet with Sam Moore) and ‘Private Number’ (a duet with Jamie Cullum) respectfully, but THAT voice and energy gives the familiar a new life that transcends mere karaoke. Our girl’s also done plenty of homework. For instance her version of ‘Hound Dog’ references the original of Big Mama Thornton while the take on ‘Don’t Play That Song’ combines the drama of the Ben E King original with the churchy piano of Aretha’s version.

Amongst the best of the originals are the first single, ‘In The Middle Of Love’ (watch out for a great modern soul mix of this) and ‘Still Here’ (which feature awesome Southern soul horns).