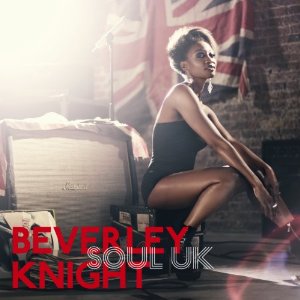 She’s here, she’s there, she’s every-bleedin’- where! The ever-lovely Beverley Knight is currently working her perfectly formed butt off promoting this new album … and such is the nature of the modern music biz. Time was when the music alone would do the talking. Now our girl (and anyone else who needs to sell something) has to endure the rounds of day time TV, trite “celeb”-led chat shows, National Lottery guest spots and all the rest. Let’s hope it works, ‘cos Wolverhampton’s finest deserves bigger success and, you know, this album might be the one to deliver just that.

Why? Well, because this is a “covers” album (Beverley’s takes on the UK soul songs that inspired her) – the music is instantly more accessible… more radio friendly even. Most people will recognize most of the music here (though I noted that one “serious” broadsheet music critic hadn’t heard of ‘Mama Used To Say’ and ‘Southern Freez’!) and nostalgia’s currently big business. We’re told that the thirty/forty somethings still have some disposable income and still buy CDs (albeit in the supermarkets) and this trip down memory lane will be perfect for them … provided of course that it’s all done the right way.

I’m pleased to report that everything here is done “the right way”. Bev’s in tremendous vocal form and she clearly relishes working her way through the thirteen hand-picked oldies; they clearly mean something to her. Personal high spots? I love the aforementioned ‘Southern Freez’ and ‘Mama Used To Say’ (look out for the Sed Soul remixes of this by the way) along with Heatwave’s classic ‘Always And Forever’ and Lewis Taylor’s ‘Damn’. I was also surprised by the beauty of the George Michael song – ‘One More Try’… maybe time for some re-evaluation. Everyone, though, will have their own faves – depending on the emotional significance that is always attached to a particular song. From her treatments, Beverly clearly has that tie to all 13. The album, by way, also includes a great DVD of Bev live at the Porchester Hall.