BETTY WRIGHT AND THE ROOTS: ‘Betty Wright The Movie’ (S-Curve) 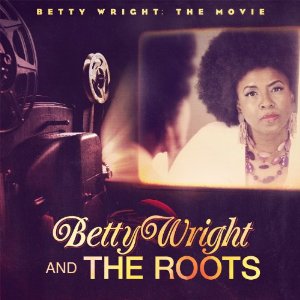 Betty Wright’s name is a synonymous with Miami soul music. Now getting ever nearer to her sixtieth birthday, she scored her first US R&B hit back in 1968 for Alston Records when she was a teenager and achieved a massive pop crossover hit three years later with ‘Clean Up Woman,’ an enduringly popular number which quickly achieved signature status in her repertoire. In the ’80s Betty continued to rack up Stateside hits via her own label, Ms. B, and although in the last decade she’s devoted less time to making her own music, the much-sampled, Grammy-winning Florida singer has continued to maintain a high profile in the music business via songwriting, arranging and producing for the likes of Joss Stone, Kelly Clarkson and Keyshia Cole.

Betty’s new album is a much-anticipated collaboration with hip-hop’s greatest band, the Roots. For aficionados of soul music, it’s a match made in heaven. Led by drummer/producer Ahmir ‘Questlove’ Thompson, the Roots’ organic sound provides an ideal backdrop for Betty’s lissom, soul-drenched vocals while cameos from Snoop Dogg and Lil Wayne give the album a contemporary cutting edge. The killer cut is ‘In The Middle Of The Game (Don’t Change The Play),’ a terrific uptempo song with an infectious hook and a disco-inflected beat that recalls the vibe and character of classic Betty Wright tracks such as ‘Miami Groove.’ The mid-tempo ‘Grapes On The Vine’ – featuring a rap from Lil Wayne – is another standout with a strong chorus and is distinguished by an arresting lead vocal from Wright (who delivers some of her trademark, glass-shattering high notes). By contrast, ‘Look Around (Be A Man)’ possesses a funkafied dance groove and the chugging ‘Whisper In The Wind’ is a breezy duet with Joss Stone which had a gospel-fuelled coda section complete with sanctified organ chords.

Veteran sweet-voiced soul man, Lennie Williams, makes a rare guest appearance on ‘Baby Come Back,’ whose propulsive drum beat rumbles along like an old Barry White groove. There’s a great rhythm track also that drives ‘You And Me, Leroy,’ an optimistic anthem about determination and perseverance in the face of adversity. Almost as strong is the blissful ‘So Long, So Wrong,’ a summer-vibed track that encapsulates Betty Wright’s sunshine soul sound. A couple of bonus tracks – one of which, ‘Go!,’ is live – round off what is a sensational return from one of soul music’s most durable female performers.

After five decades in the music business, Betty Wright has still got what it takes. Here, she’s brought out the best in the Roots and they’ve reciprocated by bringing out the best in her: as collaborations go, it’s a stroke of genius.