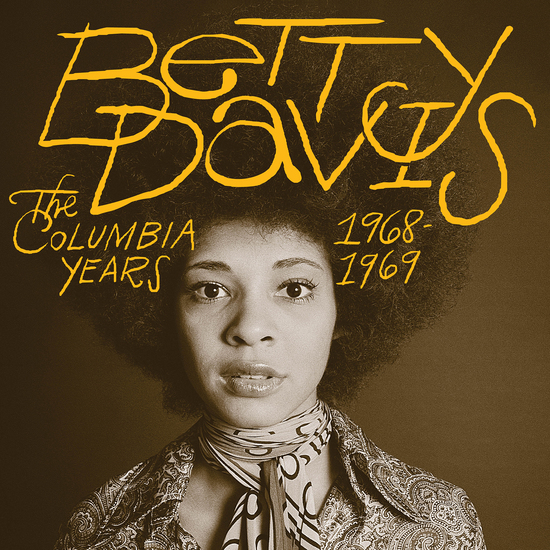 The femme fatale of funk, Afro-topped singer/songwriter Betty Davis made her mark in the early ’70s with two impressive albums for the Just Sunshine label before moving to Island Records in 1975, where she recorded her classic and perhaps career-defining magnum opus, ‘Nasty Girl.’ But as true funk disciples will know, she had a recording history that predated her ’70s discography. Born as Betty Mabry in North Carolina and raised in Pittsburgh before moving to New York where she became a model and singer, she recorded her first 45 (‘Get Ready For Betty’) as far back as 1964 when she was nineteen for Sinatra arranger Don Costa’s DCP International label. The record didn’t see any chart action  and nor did her duet with Roy Arlington called ‘I’ll Be There’ for the indie label Sacrifice around the same timeframe. But her fortunes started to improve when one of her songs was recorded by the Chambers Brothers in 1967, which is a period when Betty first came into her own as a counterculture figure and as part of Jimi Hendrix’s entourage.

This CD takes us back to that epoch: back to 1969, by which time, Betty Mabry had become Betty Davis by marrying jazz legend, Miles Davis. She was eighteen years Miles’s junior but had a profound influence on the horn blower’s sense of fashion and listening tastes. She had recorded a single for Columbia Records in 1968, ‘Live, Love, Learn,’  in tandem with Hugh Masekela and members of the Crusaders but it wasn’t a success  and she had her contract terminated. But that wasn’t the end of Betty’s brief Columbia story, as this new compilation attests, for in May 1969,  she went back in the studio with her husband, Miles Davis, at the helm. Never heard by the public, the singer’s Columbia sessions with the ‘Dark Magus’ have been the stuff of myth and legend over the past forty-eight years but now, sensationally, receive an official release for the first time.

Though the session took place in a day, it yielded six tracks, which appear alongside three takes from the singer’s earlier, 1968, studio visit for Columbia. Miles had assembled an impressive lineup of musicians to accompany the singer: comprising his jazz buddies Herbie Hancock, Chick Corea, John McLaughlin, Wayne Shorter, Larry Young and Harvey Brooks  (who would all appear on ‘Bitches Brew,’ which Miles would cut a month later) plus Jimi Hendrix associates, Billy Cox and Mitch Mitchell. Despite a heavy jazz lineup, the music – original material by Betty plus a couple of covers – is pop-funk with shards of rock guitar thrown in. The whole thing has a live, demo feel but it’s a fascinating listen. The opener, the infectious ‘Hangin’ Out,’ has Mitch Mitchell pounding out a Motown-like backbeat while ‘Down Home Girl’ is more atmospheric with a sultry country-funk feel that has a hint of James Brown in its DNA. Rock group Cream’s ‘Politician Man’ is given a good, distinctive workout and Creedence Clearwater Revival’s ‘Down On The Bayou,’ also gets covered. There are also a couple of alternative takes of Betty’s song, the old school-style R&B tune, ‘I’m Ready, Willing & Able.’ The first version breaks down and allows us to hear Betty directing in the studio and then Miles talking to her via the control booth mic with his raspy voice. The second version (a later take) is faster and more together.

More polished and produced are the set’s final three cuts (all written by Betty, who proved to be an able songwriter) helmed by Hugh Masekela in Hollywood in 1968. The strident, brassy ‘It’s My Life’ and stomping ‘My Soul Is Tired’ (which boasts a Northern Soul style backbeat) have never been released before unlike the single, the lovely ballad, ‘Live, Love, Learn.’

On the downside, you don’t get much music for your money – just nine tracks running to a parsimonious thirty minutes – but as a historical record of both Miles and Betty Davis’ joint exploits in the studio, it’s a priceless artifact. The CD is wonderfully presented with superb artwork and the liner note booklet features interviews with Betty, Harvey Brooks, and Hugh Masekela, whose enduring affection for the singer (who he hasn’t seen since the early ’70s) is genuinely touching. Hats off, then, to the folks at Light In The Attic for making these extraordinary sessions available for the first time.