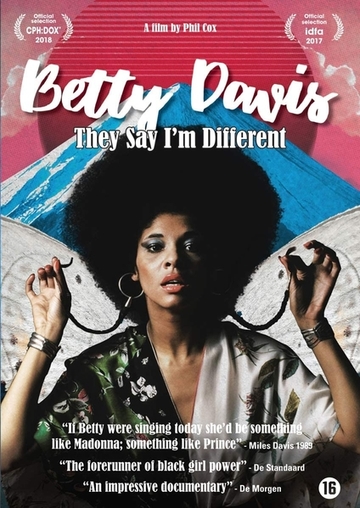 Betty Davis was so far ahead of her time that she was deeply misunderstood and even vilified for her pioneering work as a female funk musician. Indeed, the raunchy, overtly sexual nature of some of her recordings and stage performances brought controversy, public censure, and strong condemnation from the NAACP and conservative religious organisations in her native USA. Radio stations succumbed to pressure from her vociferous critics. They boycotted her records and in 1979, when her then record company decided to shelve her fourth album, the singer, then 34, retreated to Pittsburgh, where she lived in seclusion and never recorded another note. Forty years on, Davis, now 74, is still there, living in the shadows away from the glare of the spotlight. She refuses to do interviews, and though her contribution to this 53-minute DVD documentary is minimal (she appears fleetingly, as a voice on the other end of a telephone), she gave the green light to British director/writer, Phil Cox, to make a film about her life.

Cox, to his credit, has made a fabulous, deeply engaging, film about a highly influential but largely neglected artist. It is visually stunning, interspersing vintage film of Davis performing with her band with colourful, animated psychedelic collages and impressionistic cinematic images. In between these is talking head-style commentary from Davis’ erstwhile producer, Greg Errico, along with writers and Betty Davis experts, Greg Tate, Oliver Wang, and Vernon Gibbs. An elderly Davis is represented by an actress/narrator (though we don’t see her face) reflecting on her life. This part might sound cheesy, but it works well, filling in some crucial gaps in the narrative.  A key component of Cox’s film, and which helps us gain more insight, is the participation of the singer’s family, friends and members of her backing band. Their contributions are vital, helping to flesh out a vivid portrait of a mysterious trendsetter whom her ex-husband Miles Davis once described as “Madonna before Madonna, Prince before Prince.”

What this film achieves is that it makes Davis is less of an enigma though ultimately, her reticence – perhaps strange and at odds with someone so bold and outspoken as a young woman – continues to shroud her in a pall of mystery. But it is much less impenetrable than it was and you leave the film feeling that you know Davis much better than you did. Though Davis retired early, her music – defined by churning, heavy funk grooves and wild, feral, declamatory vocals – has continued to resonate with people and its influence has been far-ranging. It would be true to say that without her, there would be no Janet Jackson and Grace Jones – women who cultivated a strong persona and were uncompromising in their musical vision. Betty Davis was, then, a trailblazer, opening the door for a lot of today’s female performers, though sadly, many won’t even be aware of her. This film goes some way to righting that wrong and making the world more aware of an important musical pioneer. (Release date: January 20th, 2020)