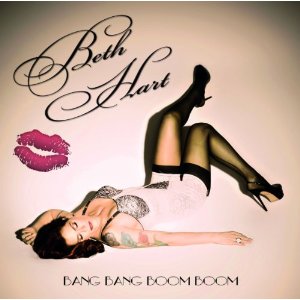 Californian chanteuse Beth Hart has been making records since the early 1990s when she scored a hit single with ‘LA Song (Out Of This Town),’ which featured on the soundtrack to the popular US TV show, ‘Beverley Hills 90210.’ Since then she’s released a clutch of albums that have brought her world renown but it was her 2011 collaboration with blues-rock guitarist Joe Bonamassa on the CD, ‘Don’t Explain,’ that opened new doors for her in terms of her audience; turning in some jaw-dropping vocal performances she clearly demonstrated that she undoubtedly was a singer whose soulful depths had previously been untapped on record. On ‘Don’t Explain’ Hart seemed to channel the spirit of one of her principal influences, the late Etta James – the album included a superlative version of James’ signature song ‘I’d Rather Go Blind’ – and on this, her eighth album (the follow-up to 2010’s tenebrous and moody, ‘My California’) Hart follows a similar stylistic trajectory, exploring a deeply soulful, blues-infused, musical path that reflects her newfound maturity (she’s just passed a significant milestone by reaching her fortieth birthday).

‘Bang Bang Boom Boom’ is unequivocally Beth Hart’s best album yet. It’s also one of her most optimistic and life-affirming. The soulfulness of her vocal performances reaches truly cathartic levels in regard to its intensity and emotional rawness. You believe every word she sings – and every emotion she projects and communicates resonates powerfully with the listener. Also, there’s a realness to the stories that her songs tell that makes them totally believable. ‘The Baddest Blues,’ the album’s stark, enthralling opener epitomises Hart’s compelling vocal style and unique sense of noir-esque drama as she sings of a stormy, turbulent relationship where love seems more like a consuming disease rather than something to be treasured. The engaging and catchy title track rides on a jaunty piano groove that recalls a Kurt Weill musical while the finger-clicking ‘Swing My Thing Back Around’ frames Hart’s arresting vocals with a sophisticated jazz-tinged backdrop complete with horns. A horn section also enhances an incredible slice of earthy gospel-soul called ‘Spirit Of God.’ By contrast, the deeply potent – and slightly ominous – slow blues ‘Caught Out In The Rain’ and the blissful ballad ‘With You Everyday’ illustrate what a supremely soulful vocalist Beth Hart has become.

Indeed, this is one of those rare albums that can be enjoyed from beginning to end without the need to skip tracks or press the fast forward button – there’s no filler and no duff tracks; rather, it’s a compelling and coherent musical statement from a pianist-singer-songwriter who is now beginning to find herself and truly blossom into an artist of real note and worth.