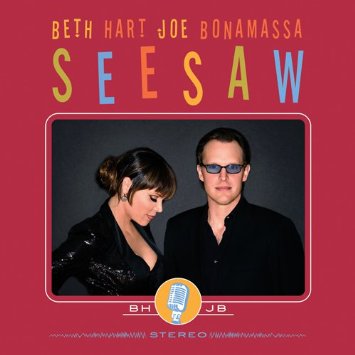 Beth Hart’s initial collaboration with blues-rock guitar maven, Joe Bonamassa, in 2011 yielded a superb long player in the shape of ‘Don’t Explain,’ a revelatory recording that illustrated how much Hart had matured vocally since her early recordings in the ’90s. Since then, both Bonamassa and Hart have worked on well-received solo projects – Hart’s most recent opus, ‘Bang Bang Boom Boom,’ was particularly ear-catching – but now the pair are back with a second instalment of ‘duets.’ The good news is that like its predecessor, ‘See Saw’ adheres to a set of laudable aesthetic values: a combination of potent, soulful performances, impeccable musicianship, sympathetic production (courtesy of the redoubtable Kevin Shirley) and a sound taste in song choice – even better, though, is the fact that it ratchets up the ante in terms of intensity and focus.

There’s no doubt about: Hart and Bonamassa have got a powerful chemistry going on – there’s a palpable sense of musical empathy taking place, which helps stoke up the sonic drama. Sometimes unfairly decried as a flashy fretboard technician, Bonamassa demonstrates that he can play with tremendous sensitivity and, where necessary, a tasteful economy – he’s also able to mirror Beth Hart’s earthy soulfulness with his deep blues-steeped sound. The centrepiece of the album is a truly incendiary reworking of Donny Hathaway’s soul classic, ‘I’ll Love You More Than You’ll Ever Know’ – building slowly and softly, Hart eventually gets to sing her heart out on this slow, mournful blues and is counterpointed by some sensational lead guitar by Bonamassa, who shows restraint for the most part but then explodes into life with an effusive solo. It demonstrates how much Beth Hart has grown as a singer in the last couple of years – her life experiences and maturity have certainly added greater depth to her vocals, which ooze a compelling soul power.

There are ten other excellent cuts beside the Hathaway re-make: ranging from a stomping retread of Ike & Tina Turner’s ‘Nutbush City Limits,’ and a super-charged take on Aretha Franklin’s Don Covay-co-penned ‘See Saw’ to the infectious brassy shuffle of Buddy Miles’ ‘Miss Lady.’ There are jazz tinges, too, on a couple of tracks – Hart brings a sultry aura to her version of Melody Gardot’s ‘If I Tell You I Love You’ and she also tackles a couple of Billie Holiday-associated tunes, including ‘Strange Fruit,’ a poignant atmospheric lament that closes what is a sensational musical collaboration.