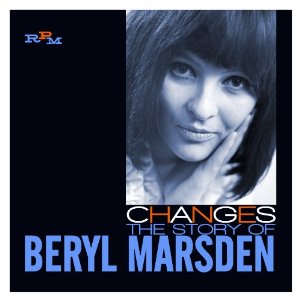 Beryl Marsden’s musical story begins back in the heady days of the mid 60s Merseybeat boom. Then a diminutive teenager, Beryl belted out soul and R&B covers with the best of the Liverpool bands. She won a contract with Decca and released a number of great singles which for all kinds of reasons didn’t dent the charts. A switch to Columbia didn’t change young Beryl’s luck so a bewildered management teamed her with the acclaimed instrumentalist Peter Bardens and a young vocalist called Rod Stewart in a mid 60s “super group” – The Shotgun Express. Again, though, chart success remained elusive. Despite all that, Beryl stuck with music – recording sporadically herself and becoming an in-demand session and backing singer. In that latter role she enjoyed the unique role of being the only ever white Vandella!

Still working, Beryl Marsden has never had an album released on her… till now. Archive label RPM (part of the Cherry Red group) have here pulled together all of Beryl’s recordings and what a great musical journey they make. All the memory-jerking 60s stuff is here – including spirited versions of things like Barbara George’s ‘I Know’, The Supremes ‘When The Love Light Starts Shining Though His Eyes’ and Stevie Wonder’s ‘Music Talk’ along with some sweet, soul-based pop and those rare recording with The Shotgun Express.

The big surprise though is the quality of the recordings Beryl made in 2007/08. They include spine-tingling versions of ‘Baby It’s You’ and ‘Will You Love Me Tomorrow’ along with original songs ‘Hello Stranger’ and ‘Everything I Need’ which are equal in that crucial spine tingle department. The album ends with a simple yet plaintive 2011-recorded cover of Bobby Darin’s ‘I’ll Be There’ (the song that always used to end the sessions at Liverpool’s Cavern Club in the 60s). Nostalgia apart, it’s every bit as good as anything on Adele’s chart-storming album… which begs the question whether young Adele will be making music as good as this in 50 years time? I doubt it.