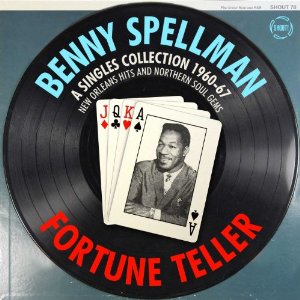 Poor old Benny Spellman! The Florida-born soul man enjoyed modest success in the early 60s but he’s chiefly known because his best songs went on to become staples for other artists. The best example of course is the ever-wonderful ‘Fortune Teller’. His 1962 recording of the clever story line song was a minor hit but every UK beat group worthy of the name included it in their repertoires with the most notable cover coming from the Rolling Stones. What must have been equally frustrating for Spellman was the fact that his ‘Fortune Teller’ B- side, ‘Lipstick Traces’, became a hit for the O’Jays! A year earlier Benny had achieved more notoriety – albeit anonymously. His is the booming bass voice on Ernie K Doe’s number 1 pop hit ‘Mother In Law’. Sadly he got none of the glory from the smash as his contribution went uncredited. Maybe he was happy with the modest studio fee.

Those three classics are obvious standouts on this new Shout collection that gathers together all the singles he released between 1960 and 1967 on the New Orleans-based Minit, Alon, Sansu and Ace labels. (Anoraks will know that he also cut two singles for Watch records in 1964; the four songs involved were unavailable for license for this collection). The 30 sides that are here are a real mixed bag – a veritable New Orleans gumbo. They range from the infectious trio of songs mentioned above to blues based material like ‘Ammerette’, through doleful ballads typified by ‘Life Is Too Short’ and on to out-and-out novelty numbers like ‘The Word Game’ – a re-write of Shirley Ellis’ ‘The Name Game’. There’s also plenty of easy going typical New Orleans rollers (‘I Didn’t Know’ springs to mind), a ‘Fortune Teller’ sound-alike in ‘This Is For You My Love’ and an instrumental version of Spellman’s most famous song… all great archive stuff.

Post 1967 Benny Spellman went on to record unsuccessfully for a label called MorSoul. He also got to provide backing vocals on Paul McCartney’s New Orleans recorded ‘Venus And Mars’ album. (It’s said that he even provided the cabaret at Macca’s birthday party). In 1975 he took a “proper” job working for Miller Beer but he continued to perform at heritage shows. Then in 1986 he was ordained into the ministry. Ten years later he suffered a stroke – moving to a care facility in his home town of Pensacola. Benny Spellman died in 2011 aged 79. Here’s’ a great chance to catch up on his little-known story.