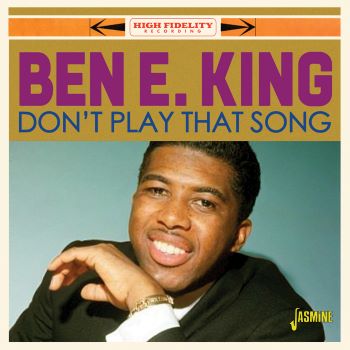 The superlative BEN E KING (born Benjamin Earl Nelson in North Carolina in 1938) is chiefly remembered in the soul histories for two things. First, his seminal time as lead singer with the Drifters when he fronted their classics ‘There Goes My Baby’ and ‘Save The Last Dance For Me’ and, second, for his evergreen solo hit ‘Stand By Me’, a song so familiar that we tend to underestimate just what a powerful and soulful statement it is. But there is so much more to Ben E king than just that. Indeed, more and more modern soul commentators are of  the mind that King was as important in the birth of soul as the great triumvirate – Sam Cooke, Jackie Wilson and Ray Charles. To add weight to that contention, said commentators will also cite the fact that ‘There Goes My Baby’ with its string arrangement and big production was the first “true” soul record by a vocal group – opening the soul floodgates.

If you’re still in any doubt about the early importance of Ben E King, then look no further than this comprehensive retrospective of his early solo career . It covers just two years … 1960 (when he quit the Drifters) to 1962. In that period and indeed for many more years to come he was pacted to Atco/Atlantic and across  the generous 30 tracks you’ll hear the emergence of the new soul genre, fuelled by King’s remarkable gospel-reared voice.

The album, of course, contains all the big hits – ‘Spanish Harlem’, ‘Don’t Play That Song’ and ‘Stand By Me’ and, to reiterate, don’t underestimate that song. It still packs a huge emotional punch and remember it was one of John Lennon’s favourites and it was also voted as one of “The Songs of the Century” by The Recording Industry Association Of America. But this Jasmine collection yields many more treasures – things like ‘First Taste Of Love’ and ‘Ecstasy’ – both (like ‘Stand By Me’) regularly covered by the 60s beat merchants. Atco/Atlantic also had King record songs from the cream of contemporary American writers – Goffin/King, Leiber/Stoller and Pomus/Shuman amongst them while his albums were stuffed with classy covers of pop and soul hits , like Curtis Mayfield’s ‘He Will Break Your Heart’ and Henry Mancini’s ‘Moon River’ (King’s treatment stays close to the Jerry Butler version).

Post ’62 King enjoyed plenty more hits of course and he was a regular visitor to Europe and the UK where he was almost deified. He played to packed houses and the bulk of his show featured songs from the fruitful, classic era chronicled in the collection.