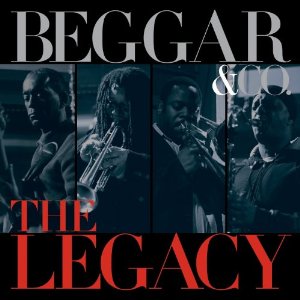 Beggar & Co were mainstays of the British soul, jazz and funk scene in the 80s. They scored a few hits in their own right and in offshoots like Light Of The World. They also worked with people like Spandau Ballet – augmenting that group’s sound with their sparkling brass infills. Since the 80s the core of Beggar & Co has stayed together and found plenty of work supporting visiting artists like Jean Carn, The Jones Girls and Tom Browne. Over the last 12 months the band has been busy in the studio working on this – their first recording for some time.

The album’s title indicates the direction they wanted their new music to take. The band want ‘The Legacy’ to be a homage to the outfits that were directly responsible for them getting into music in the first place – Kool and the Gang, Brass Construction, the Fatback Band, Cameo, the Ohio Players and so on… and by and large they’ve succeeded. A casual listen to the 16 tracker might make you think that time’s stood still and we were still in the 80s, especially on the heavier, funkier cuts. The opening salvo (the first five tracks) comprises of loose soul/funk workouts. Bass heavy, they offer varied levels of brass riffing and chanted/sung, repetitive vocals. ‘Makin’ Music’ is the best example. There’s more of the same on ‘Walk’ while the band truly nail their colours to the mast with a great cover of War’s ‘Slipping Into Darkness’.

As a counterpoint to the funk, the LP also features a goodly selection of lighter cuts which meld elements of smooth jazz and the flavours of the Mizell Brothers and Donald Byrd. ‘Say It Softly’ is a good example. It boast the sweetest melody (annoyingly familiar, though I can’t place it) and it’s very, very catchy; ditto ‘Loving Life’. The album’s completed by a driving vibraphone-led ‘Niija’, a Latin shuffle in the form of ‘Carnival and a new mix of their biggest hit – ‘Somebody Help Me’. This is as clean, crisp and infectious as the original –which takes us back to where we came in.