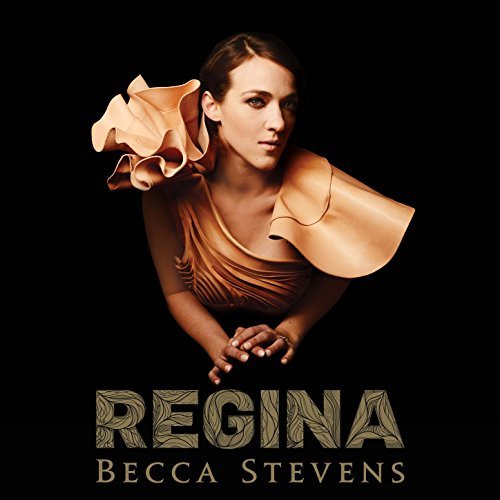 As it’s barely April, it might seem a tad early – and presumptuous, perhaps – to make a nomination for album of the year, but I’ve no doubt that by this year’s end when we’re reflecting on the musical highs of 2017, Becca Stevens’ fourth long player, ‘Regina,’ will be near the top of most music critics’ lists. Trying to define the sound and style of this 32-year-old North Carolina song siren is a tough ask given that her music is  both allusive and elusive – there are hints of Joni Mitchell and some palpable Appalachian folk elements in Stevens’ musical DNA but listen closely and you’ll also hear subtle jazz and soul nuances, a soupcon of pop and even, on this new album, a grandiose hint of ’70s prog-rock. These disparate elements coalesce on ‘Regina’ to create something unclassifiable that on paper, perhaps, shouldn’t work – but in practice, somehow, and quite miraculously, Stevens uses a special kind of alchemy to seamlessly bind all her influences together into a unique, beautifully-wrought tapestry of sound, aided by producer Troy Miller, who devised alluring widescreen soundscapes for the singer to act out her narrative.

And what a narrative it is. In essence, ‘Regina’ explores the psyche of female monarchs – both real and imagined ones –  who function as the main inspiration for what is a good old-fashioned concept album (a staple of rock and pop in the ’70s). Thematically, its central conceit might sound too esoteric for some listeners but the music – mostly gorgeous and otherworldly – can be enjoyed for its own sake. Indeed, Stevens could be singing in Mandarin and it would still sound amazing, such is the luminescent beauty of her voice. But this girl possesses a beautiful sound and intellect – a deadly combination – and that’s what makes ‘Regina’ such a stimulating affair. The music – densely layered, with stacked vocals and ethereal backdrops –  seduces the ear but its lyrical content makes it an even more potent force.

There’s so much to appreciate on ‘Regina’ that it would seem almost churlish to single out individual highlights. Indeed, it’s one of those rare albums these days that can listened to from beginning to end without the need for  hitting the skip button. ‘Venus,’ a thoughtful and alluring ode to the classical world’s queen of love, opens the proceedings. With its astral lead vocals and multi-tracked heavenly choir (with Laura Mvula assisting) it sets the sonic tone for the rest of the album. The superb folk-infused ‘Lean On’ is darker and  more reflective while ‘Both Still Here’ – propelled by plucked chords from Stevens’ mandolin-like charango – has a gorgeous haunting quality.

In an acute change of style, the dramatic ‘Queen Mab’ – inspired by the fairy queen mentioned in Shakespeare’s Romeo & Juliet – opens with closely-harmonised vocals that, bizarrely, recall the work of Brit prog-rock behemoth, Yes, during their ‘Close To the Edge’ phase in the early ’70s. But these hypnotic celestial harmonies are juxtaposed by a thumping R&B/hip-hop beat, which certainly makes for  startling contrast. Different, too, and seemingly out of kilter stylistically with the rest of the album, is ‘Mercury,’ a New Wave-ish rocker that stretches the album’s regal conceit to breaking point by being a tribute to Queen’s flamboyant frontman, Freddie Mercury (the lyrics are ingeniously drawn from Mercury interview quotes).  But Stevens is at her best on mellower songs, like ‘Harbour Hawk,’ the delicate ‘Ophelia’ (another Shakespeare-insired piece) and ‘The Muse,’ the latter co-written by and featuring ex-Byrd and CSN&Y member, David Crosby. Musical polymath, Jacob Collier, joins Stevens on the album’s closer, a delightful, though perhaps slightly incongruous, duet take on Stevie Wonder’s ‘As,’ which rounds off the album by bringing an upbeat note to the proceedings.

It might be premature to hail ‘Regina’ as a masterpiece, perhaps, but it is undoubtedly a significant, coming-of-age opus from a supremely-talented singer/songwriter who has more than lived up to the promise of her earlier recordings. With the magisterial ‘Regina’ she’s not only set a new benchmark for herself but also raised the bar for other female singers to aspire to. For now, then, she is queen of all she surveys.