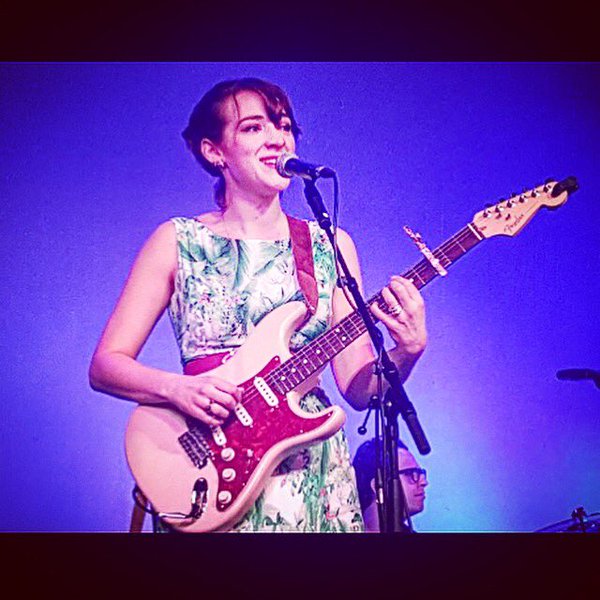 The Cheltenham Jazz Festival, which celebrates its twentieth anniversary this year, has always aimed to present a broad range of different styles of music under the ‘jazz’ umbrella and therefore an artist such as North Carolina singer/songwriter, Becca Stevens – whose unclassifiable but allusive music draws together elements taken from  jazz, folk and pop – seemed a perfect fit.  Stevens possesses one of the most striking voices around today and can be heard guesting on recordings by Brad Mehldau, José James, Ambrose Akinmusire and, most recently, Snarky Puppy. Her voice has a beguiling, girlish charm but is never twee and characterised by a ravishing purity of tone. Backed by empathetic three-piece band (bassist Chris Tordini, drummer Jordan Perlson, and pianist Oli Rockberger) and alternating between the mandolin-like charango, ukulele and guitar (both acoustic and electric), Stevens proved that she is a formidable songwriter as well as accomplished singer and musician. One of the standouts of her performance was a rendition of  the haunting ‘Thinkin About You,’ the killer cut from her 2015 album, ‘Perfect Animal.’ There were other highlights too – spellbinding renderings of songs from her current LP that included ‘I Asked,’ featuring some mesmeric charango playing,  ‘Imperfect Animals,’  an agitated  ‘Be Still’ as well as a some new material. The best of the latter was ‘The Muse’ – which Stevens said had lyrics written for it by David Crosby (of The Byrds and Crosby, Stills and Nash fame) and is taken from her forthcoming album ‘Regina.’ It proved to be a delicate but absorbing meditation on creativity and inspiration. Stevens also served up a strikingly beautiful stripped-down arrangement of Stevie Wonder’s ‘Always,’ which was delivered as a duet with pianist/singer Oli Rockberger. Tremendous stuff.