BARBARA THOMPSON: Journey To A Destination Unknown (Jazz In Britain, £26.99) 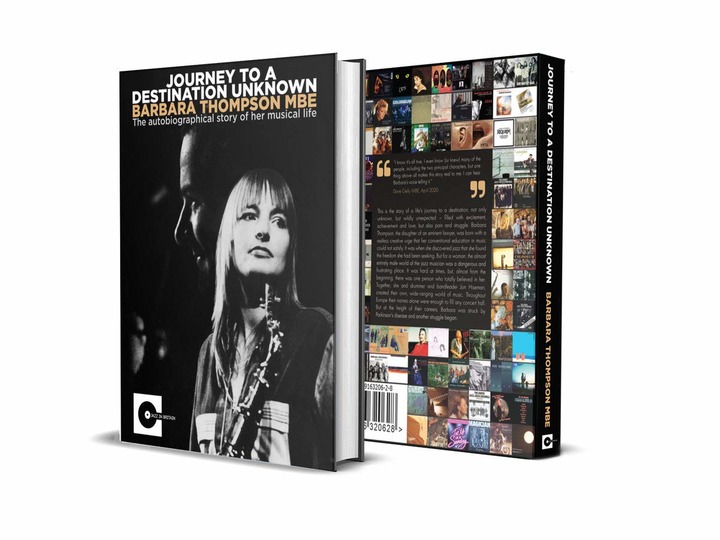 I’m sure I’m not alone in regarding Barbara Thompson as one of the greatest musicians the British Isles has produced. A virtuoso jazz saxophonist and flautist as well as a prolific composer, Thompson’s appeared on over 50 albums, written classical concertos, scored soundtracks for hit TV shows (including ITV’s crime drama A Touch Of Frost) and been awarded an MBE for her services to music. More importantly, perhaps, she blazed a trail for female instrumentalists at a time when sexism and chauvinism were rife within Britain’s largely all-male jazz scene. But as her deeply engrossing and beautifully written autobiography reveals, she largely overcame most of the obstacles in her path via a mixture of passionate determination combined with her exceptional talent as a musician.

Thompson’s story began in Oxford, where she was born in 1944. The daughter of an eminent lawyer, she was drawn to music at an early age and when her parents divorced, she found solace by immersing herself in a world of sound; honing her skills as a woodwind player. An aspiring classical flautist, she won a place at the Royal College of Music but around the same time had an epiphany when she heard the Duke Ellington band in concert; mesmerised by the soulful playing of the celebrated American alto saxophonist Johnny Hodges, she then gravitated to the expressive capabilities of the saxophone and fully embraced jazz with its emphasis on improvisation.

She found it hard being taken seriously as a musician at first and after a stint playing with the all-female Ivy Benson Band in 1964, she joined an all-girl pop group, She Trinity, two years later which released a few singles under producer Mickie Most. But if that experience ultimately caused disillusionment, Thompson soldiered on and in 1969, her career took a quantum leap when she joined Neil Ardley’s groundbreaking New Jazz Orchestra, where she was both treated with respect and taken seriously. By then, she was married to drummer Jon Hiseman and played with him in the famous jazz-rock band, Colosseum. It wasn’t long before Thompson took flight with her own band – in fact, she led two different groups in the early ’70s and both helped to stake her reputation; Jubiaba, an earthy, energetic Latin-rock aggregation and the more famous Paraphernalia, whose seamless fusion of jazz, rock and classical flavours garnered them many fans, especially in continental Europe. (Paraphernalia, of course, would become synonymous with Thompson’s name and the band remained active up until 2015).

As well as documenting her musical endeavours in the kind of forensic detail that will satisfy the anorak brigade, Thompson’s book interweaves family life into the narrative, resulting in a book that is well-balanced in the way it juggles personal concerns with career exploits. But what makes the book such a joy is not only Thompson’s eloquent delineation of her life but the copious amount of accompanying illustrative material, which truly brings her story alive in vivid detail. Commendable, too, is Thompson’s unflinching honesty, especially in regard to how she coped after being diagnosed with Parkinson’s Disease in 1997, and her heartbreak at losing her husband, Jon, in 2018.

Funny and heartbreaking, revelatory and insightful, Journey To A Destination Unknown is undoubtedly a story of a life well-lived; a tale of tenacity and courage, but also, ultimately, love.

Get the book here: https://barbara-thompson.co.uk/product/journey-to-a-destination-unknown/