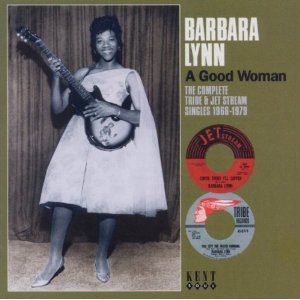 Texas’ Barbara Lynn (born Barbara Lynn Ozen) was (indeed still is) a rare commodity on the soul scene – a female singer/songwriter who accompanied herself on guitar – and a guitar played southpaw! Her uniqueness brought her to the attention of Texan music biz mover and shaker Huey P Meaux who signed her up to a management deal in 1962. The contract, however, proved to be long-term, restrictive and manipulative and Meaux had Ms. Lynn record for a number of his own small labels – though when he sensed he had a good track in the can he would lease it to a bigger label with a superior distribution network. Thus some of Barbara’s best known early work – ‘You’ll Lose A Good Thing’, ‘You’re Gonna Need Me’ and ‘Oh Baby (We Got A Good Thing Goin’)’ were released on Jamie while from 1967 – 1973 Meaux had his protégé working with Atlantic. Here though, on this new CD, the Kent music detectives bring together two dozen of the lady’s lesser known recordings – mostly singles recorded chiefly for Meaux’s Tribe and Jet Stream labels between 1966 and 1979.

The earlier recordings (those cut in the 60s) possess the same rustic but committed charm of things like ‘You’ll Lose A Good Thing’. The opener, ‘I’m a Good Woman’, is a great summation of Barbara Lynn’s sound and style while there are interesting covers of Joe Tex’s ‘Watch The One (That Brings The Bad News)’ and the soul perennial ‘You Left The Water Running’ (we’re told that Barbara’s version was the second commercial recording of the song – coming just after Billy Young’s original).

The later tracks – though a little more polished – still retain all of the soulful earthiness that you’d associate with a Texan soulstress recording in studios in New Orleans and right across the south. The outstanding cut is 1976’s ‘Movin’ On A Groove’ – a fabulously bright dancer that was rightly big on the Northern scene. Here the song gets it first “proper” reissue (all previous reissues have been badly dubbed from disc rather than master tapes). Also of note are covers of John D Loudermilk’s oft-recorded ‘Then You Can Kiss Me Goodbye’ and a take on Hank Williams’ country anthem ‘I’m So Lonesome I Could Cry’. There’s lots of original material too and it’s a mix of light dancers, rolling grooves and nods to the blues – like ‘Disco Music’, which is the most un-disco tune you could ever imagine!

Barbara Lynn is still active in music and her contributions to the liner notes are illuminating – especially her words on Meaux, who she clearly respected despite his tight controls on her career. Most soul fans are familiar with the lady’s hits and her Atlantic work…. here’s the opportunity to complete the picture of a proper soul singer.