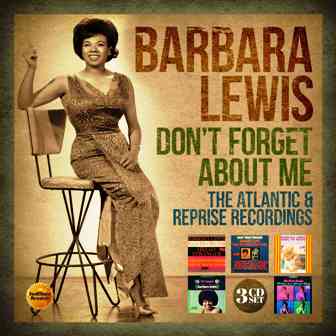 Barbara Lewis’s 1963 smash ‘Hello Stranger’ is, by common consent, one of the greatest soul records of any era and like most great records it’s hard to say exactly why. But let’s try. The tune is sweet and memorable. The vocal is sincere and aching. The rhythm is gentle but infectious while the haunting organ intro lets you know you’re in for something rather special… and the icing on the cake, of course, is the presence of the mighty Dells on backing vocals. In other words, everything on ‘Hello Stranger’ works. It all comes together quite beautifully. Little wonder it scaled the charts and catapulted the young Michigan singer (and song author) Barbara Lewis to notoriety. However, the unique charm and success of ‘Hello Stranger’ somehow held back Ms Lewis’ career. She did secure two more chart hits but, clearly, she’s forever remembered for ‘Stranger’.

Hopefully, that might belatedly change with this splendid Soul Music Records retrospective of Barbara’s fertile time at Atlantic Records. The 3 CD, 68 tracker pulls together everything she released on Atlantic (via a licensing deal with Karen Records) along with two sides of a single which came out on Reprise. The music is presented chronologically by album release with non-album singles included too.

‘Hello Stranger’ naturally casts its shadow over the collection, but there’s plenty here that almost rivals it. For starters there’s Barbara’s other big hit, 1965’s ‘Baby I’m Yours’ while soul collectors might know that the Dells worked with Barbara on a number of other recordings like the gorgeous ‘How Can I Say Goodbye’, ‘Spend A Little Time’ and ‘Someday We’re Gonna Love Again’ which was, of course, covered by Merseybeat maestros, the Searchers. Proper Northern collectors will know all about the surging ‘I Remember The Feeling’ while amongst the other plentiful highlights are the covers of ‘Working On A Groovy Thing’ and ‘Love Makes The World Go Round’ and the Phil Spector-ish ‘Make Me Your Baby’. The set also features plenty of Lewis covers of pop hits and US “standards” – that was the way of 60s soul albums but what gives the collection a real consistency is Barbara’s unique vocal approach. Often understated, it has a peculiar sweet yet pleading quality that brings its own charm.  She says (in the excellent sleeve notes from sjf colleague Charles Waring) that her style was down to the fact that she grew up with pop music rather than gospel – the usual entry route for soul divas.

Optimistically, this collection is named for Barbara’s recording of Goffin/Kings’  ‘Don’t Forget About Me’. With such a comprehensive retrospective, we never will!