AZTECA: ‘Azteca’ and ‘Pyramid Of The Moon’ (bbr) 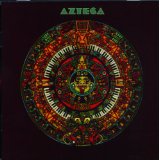 With their unclassifiable and ambitious fusion of Latin, soul, rock, jazz, blues and funk flavours the Oakland-based multi-racial band, Azteca, encapsulated the ‘anything goes’ eclecticism of the Bay Area music scene in the early 1970s. The 17-strong aggregation was the brainchild of siblings and Latin percussion maestros Pete and Coke Escovedo and in whose ranks were former Miles Davis drummer – and future Return To Forever member – Lenny White, Headhunters’ bassist, Paul Jackson, and guitarist, Neil Schon, who would later form the rock band, Journey. Long out-of-print, the ensemble’s eponymous debut for Columbia in 1972 is now reissued via the UK’s bbr label alongside the group’s second and final long player, 1973’s ‘Pyramid Of The Moon.’

‘Azteca’ begins with a short orchestral prelude before an explosion of wild percussion initiates the opener proper, the thundering salsa-esque Latin groove, ‘Mamita Linda.’ By contrast, ‘Ain’t Got No Special Woman,’ which was issued as a single, is an infectious Santana-esque rock/soul groove that’s livened by boisterous horn charts, rattling percussion and a combustible rock-style guitar solo by Neil Schon. ‘Empty Prophet’ is a slow, orchestrated blues while the jaunty, syncopated ‘Can’t Take The Funk Out Of Me’ recalls the funk ‘n’ soul sophistication of Tower Of Power. The funk quotient gets even more frenetic on the propulsive tracks ‘Peace Everybody’ and ‘Non Pacem,’ both of which possess an aura of cosmic soulfulness. Even when the group takes it foot off the throttle – as on the delightful mid-tempo ballad, ‘Love Not Then,’ featuring female singer Wendy Haas – the music they make is still riveting.

More cohesive and sharply focused, the group’s second album, ‘Pyramid Of The Moon,’ is even better than their debut and opens with ‘Someday We’ll Get By,’ a superb slice of insistent Latin-complected soul that recalls Tower Of Power at their best. ‘Find Love Today’ is a multi-textured message song that combines different tempi as well as nuanced jazz and Latin elements. With their salsa-esque polyrhythms ‘Whatcha Gonna Do’ and ‘Red Onions’ are more overtly Latin in character – but any subtlety that is lacking on those two particular tracks is compensated for by the inventive arrangements on the more complex ‘New Day Is On The Rise.’ ‘Love is a Stranger’ shows off the group’s earthy funk side while the album’s closer, a mesmeric brass-led instrumental called ‘A Night In Nazca,’ leans more to Latin jazz with a fusion twist.

Though they opened as a support act for the Temptations, Stevie Wonder, and Earth, Wind & Fire in the early ’70s and received some good exposure in the USA, Azteca weren’t able to make a commercial breakthrough with their records and by the time that 1975 had arrived, the group had split up. It’s taken forty years for these lost gems – both adorned in distinctive, mandala-style, Aztec artwork – to be reissued so hats off to those enterprising folks at bbr for making these titles available again.