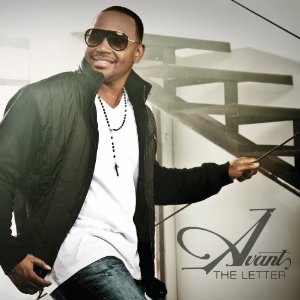 (Myron) Avant released his last album back in 2008 and this new set was originally going to be called ‘Wake Up’ after what the Cleveland singer thought was possibly the set’s strongest track. We don’t really know, but my guess is that the label execs didn’t agree. The song is a decent, if predictable modern R&B ballad – full of seemingly sincere pleading and plodding electronic beats. So, Avant was sent back to the drawing board and he and his people came up with a new title, this one – ‘The Letter’. The concept, it seems, is that the eleven tracker is an open letter to his fans – “about what’s going on in my life, what’s going through my head and my struggles as a man“. Yes, it must be really hard being a millionaire singing star, surrounded by lackeys, stylists, gofers, advisers, helpers, fetchers, carriers and adoring fans – so I’d prefer to judge the music – not the concept.

I’ve already used the adjective that best describes the music – “predictable”. There’s nothing new or truly exciting in here – but maybe that’s the way it was meant to be. Avant’s fans will be delighted with everything, but those who aren’t committed will ask what the fuss is about. Our man knows his fans and knows that they’re not teeny boppers any more- so he regales them (in the main) with a well-crafted selection of smooth, cod-sophisticated ballads, the best of which is ‘Body Police’ which boast a lovely –almost tender – melody that might remind you of Joe’s ‘All The Things’. Most ambitious of the ballads is the closer – ‘Walking On Water’. Its ambition lies in its simplicity – it’s uncluttered with a mainly piano accompaniment that should allow it to cross genres. Methinks Avant hopes it will take the song into the lucrative wedding song market!

Best of the beaters (there aren’t that many, by the way) is the hugely infectious ‘Nightlife’. Its excellence is chiefly down to the production skills of Mike City. The cut has all that great man’s trademarks – the tight, irresistible mid-tempo beats, a great melody, sweet harmonies on the hooks and a lyric that unpretentiously deals with the pleasure of…. well… nightlife! It’s a great track that will please modern soul people and the R&B crews. There’s not too much else that stands out though ‘That Dude’ has an odd retro, electro feel to it while ‘Had Enough’ is one of those bumpy R&B rides. Not a bad album, then, but not a mould-breaker… my hunch is that it was never intended to be; rather a mid-career consolidating album.