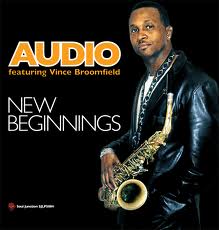 Audio is the alter ego of Florida based soul man Vince Broomfield. Vince first broke through in 1987 with ‘Do You Really Want Me’ which quickly became popular on both the modern soul and rare groove scenes. On the strength of the single he released an acclaimed album – ‘Romantic’ – followed by another single, ‘Berries On The Vine’. Since then he’s chiefly worked live with his sister, Dee Dee Wilde’s band, which also features his brothers Al, Ben and Eugene. Eagle-eyed sleeve readers will have noted that the whole Wilde/Broomfield clan have played a big part in the Cool Million project too. To tie in with the Cool Million work, Soul Junction released a couple of previously unissued Audio tracks and as is often the way with Soul Junction product, the single sold out very quickly. So, to satisfy demand for Audio’s special brand of laid back, sophisticated smooth soul, the label have now released a “new” album on the man. ‘New Beginnings’ isn’t brand new though… the 8 tracks were recorded between 1989 and 1995… but they’ve never been available before… so more or less “new”!

All the songs on the set have been penned by Vince and musically they’re very much of their time – coolly smooth, they’ll soon become favourites with sophisticated soulsters. The cut ‘My Girl’ is particularly strong. It’s a busy, bustling tune with an infectious falsetto hook and some great sax work from Vince himself (he also plays keys too). Elsewhere, ‘I’ve Been Watching You’ is a sultry ballad while ‘I Need Your Kisses’ has real modern soul room anthemic possibilities. In places – ‘Rain, Rain Go Away’ and ‘All My Love’ for example,  the flavours remind me of Ronnie McNeir and maybe that’s a good reference point. Like Ron, Vince does it all himself. He knows what he’s good at and he knows how to deliver his special sound. For more details go to www.souljunctionrecords.co.uk