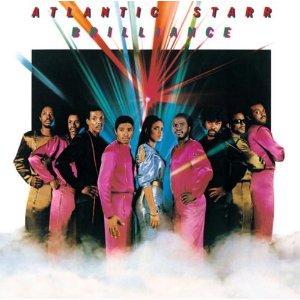 Atlantic Starr’s biggest UK hits came in the late ’80s with the Top 10 smashes, ‘Secret Lovers’ and ‘Always,’ the latter a syrupy romantic ballad that climbed to #3 in the summer of 1987 (it was also a US chart topper). Both those tunes were fronted by singer, Barbara Weathers, but the band – at least to this writer – made their most impressive music at the beginning of that decade with original chanteuse, Sharon Bryant.

Signed to A&M in 1978, the nine-piece soul group from New York released their third album, ‘Radiant,’ in 1981. Unlike their previous two long playing efforts, it was helmed by Commodores’ producer James Anthony Carmichael and showed a cohesion and sharply focused sense of musical direction that had hitherto been lacking. Now reissued and remastered for CD by Dutch label, Vinyl Masterpiece, ‘Radiant’ is well worth picking up, including the Sharon Bryant-fronted big US smash, ‘When Love Calls,’ as well as the lovely dancer, ‘Think About That,’ and a wonderful sensuous ballad in the shape of the Sam Dees’-written ‘Send For Me’ (‘Am I Dreaming,’ from the same set, is also penned by him).

Though a good album it was unequivocally eclipsed by 1982’s ‘Brilliance,’ also reissued by Vinyl Masterpiece. Recorded at a time when soul music still adhered to organic production values and synthesizers were used merely for colouration, ‘Brilliance’ is the best album that Atlantic Starr ever recorded. It’s undoubtedly the shining jewel in their crown and now remastered sounds better than ever. ‘Love Me Down,’ with its catchy chorus and simmering, orchestrated, back beat is a great opener, and serves as a great showcase to Sharon Bryant’s plaintive alto, as does the breezy dancer, ‘Circles’ – a big smash in the USA – which is even more infectious. Also listen out for another amazing Sam Dees’-scribed slow jam, the plangent and yearning ‘Your Love Finally Ran Out’ featuring tortured lead vocals from David Lewis and some deft string touches over a slow, mesmeric groove. On the uptempo front, ‘Sexy Dancer,’ with its addictive funky rhythms stands out, as does ‘Love Moves.’ These two limited edition CDs are available directly from www.vinyl-masterpiece.com and most internet soul music retailers.