ASHFORD & SIMPSON: ‘Come As You Are’/’So So Satisfied’ (bbr) 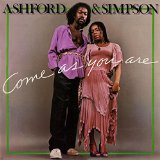 Installed as in-house writers/producers at Motown in the late-’60s, where they tasted huge success helming hits for Marvin Gaye & Tammi Terrell as well as Diana Ross, Nick Ashford and Valerie Simpson’s true goal was to make records under their own name. Berry Gordy, though, had other plans and was reluctant to put them in the recording studio as artists. Frustrated, Ashford & Simpson quit the Detroit label and headed to Warner Bros. in 1973. Though they got off to a slow start, it was there their artistic aspirations began to bear fruit, eventually culminating with them becoming hit-makers as well as hit-writers.

1976’s ‘Come As You Are’ follows in the wake of bbr’s reissue of the duo’s late-’70s work for the Burbank label. It’s a fine album packed with great songs from the husband-and-wife duo and superlative ensemble work from ace musicians such as Richard Tee and Don Grolnick (keyboards), guitarists Eric Gale and Hugh McCracken, bassist Francisco Centeno, drummers Steve Gadd and Rick Marrota, and percussionist, Ralph McDonald. The icing on the cake is provided by Motown arranger, Paul Riser’s fabulous orchestral charts. Conceived in the mirrorball age, its finest dance floor moment is provided by the insistent ‘One More Try’- a 12-inch disco version of the track  is the best of this reissue’s three bonus cuts. ‘Caretaker’ also catches the ear while the set’s best ballad is the gorgeous mid-tempo paean to love, ‘Somebody Told A Lie,’ where Ashford & Simpson’s soulful voices intertwine majestically in sonic ecstasy.

‘Come As You Are’s’ follow-up, 1977’s ‘So So Satisfied’ is even better. Featuring many of the same studio personnel as its predecessor, it ranges from zesty disco grooves (the anthemic ‘Tried, Tested, And Found True’ and more reflective ‘Over & Over’) to sensuous mood pieces (‘Maybe I Can’t Find It’) and sweet soul ballads, the latter represented by the beautiful title track where Paul Riser’s strings create a heavenly ambience. Appended to the original album are five bonus tracks – two are underwhelming single edits but three are far more interesting: an extended original disco version of ‘Over & Over,’ Mike Mauro’s effervescent remix of ‘Tried, Tested, & True,’ plus Joey Negro’s energised retooling of ‘Over & Over.’ Two essential purchases for connoisseurs of classic ’70s soul music.