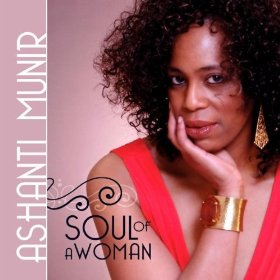 Ashanti Munir hails from Brockton, Massachusetts and she debuted in 2008 with an album called ‘Balance’. The set was one of that year’s best indie soul outings, neatly avoiding the pitfalls that bedevil many similar projects. The good news is that this – her sophomore set – is even better. ‘Soul Of A Woman’ is a great little collection and if it was by a big star and on major label it would be getting exposure all over the place … as it is, it will probably need the savvy, good old soul underground to get it off the ground. It may take time, but it will takeoff ‘cos it has so much going for it.

First up is the quality of the songs. The ten original compositions (we’ll come to the two covers later) have a consistent quality that you don’t often get on indie soul sets. The opening cut ‘Easy Way About U’ is a stormer. It’s an almost perfect modern soul confection (with the emphasis on soul rather than feigned pastiche) and by the start of the gritty sax break everyone’s feet should be well tapping – which brings us to the second factor contributing to the album’s quality – the production. Though Ms Munir takes “exec” control she works chiefly with Craig A Eleazer and he has a great ear for what should be going on when and where – witness the beautiful layered harmonies on ‘Sometimes Love’ or the old soul feel of ‘Blue’. The third and chief reason why this LP is so good is the obvious one – Ashanti Munir has a great, true soul voice. It has a world-weariness you don’t usually get from an artist at so early a stage in a career. Hear it to good effect, on the gospel tinged ballad ‘Until U’ or the searing slowie ‘It Should Be U’ (that one a duet with Neil Le Tendre). Ms Munir and Eleazer are so confident about that voice that they’ve take on two monumental covers. The first is a great groove heavy version of the Mary J Blige penned ‘Ooh’ and the second is a tremendous version of Smokey’s ‘Ooh Baby Baby’. There, the duo don’t take on the original; rather they strip it down and keep it simple. The harmonies are understated, the piano a delight and the gentle, jazzy guitar fills superb. It illustrates what I meant about the production values. With tight budgets, simplicity can bring results. Other goodies on the set include the LP’s title song – a crisp, little two stepper and the Wadz produced retro ‘So Smooth’ – that, of course, was a focal point on his own recent set. Yes, ‘Soul Of A Woman’ is a proper soul album and I urge you to at least investigate… which you can at www.myspace/ashantimunir or www.soulchoonz.com