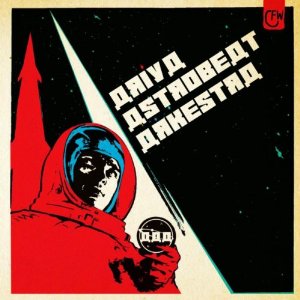 Proper soul and jazz fans know that the music they love comes in all shapes and sizes and that by trying new flavours untold pleasures can reward the jaded palette. During 2010 more and more discerning soulsters have been discovering Afrobeat. Renowned drummer Tony Allen has enjoyed maximum exposure; the Fela Kuti musical has won West End acclaim; his son, Femi is packing halls on his UK tour; and Afribiza is rocking the dance world. Now the 8 piece Ariya Astrobeat Arkestra are set to add weight to the Afrobeat advance with this 10 track eponymous album.

The band is based in Leeds and are an amalgam of kidkanevil and Homecut. They came together in 2007 at the Leeds jazz venue, the Sela Bar where they forged a sound that though steeped in the Afrobeat tradition, added elements of Donald Byrd (circa 1970s) jazz, 60s free jazz and the sparse funk of golden age James Brown. Hear that mix at its best on the driving ‘Put Leg To Road’ – it’s big and brash with wild horns and a true funk undertow and I’d swear there’s a sweet little vibraphone in there too. ‘Body No Be Firewood’ is wild too, with the race being led by a manic Hammond chased by powerful percussion. Both those cuts are instrumentals – indeed there’s only two vocals on the album; ‘Sankofa’ and ‘Conflict Arise’. The former has an almost Caribbean swagger to it, embellished by a quasi chanted vocal and a short rap courtesy of Testament. The latter is different altogether; in fact ‘Conflict Arise’ is the chilliest cut on the set. There’s a dark side to it and Shara Meek’s voice is perfectly suited to the mood.

All the above are original tunes. The LP’s only cover is an energized version of Jimi Hendrix’s ‘Crosstown Traffic’. Don’t know what Hendrix would have made of it, but I’d like to think that James Brown would have been mighty proud if the JBs had made such a funky groove from it. In truth, this album won’t suit everyone, but as I hinted up top if your soul palette’s a little jaded by the polished, colour-by-numbers music peddled by many modern soulsters, the Arkestra might just touch a nerve and listen up for a cute little, organ-led hidden track right at the end… quite out of kilter with the rest of the album.